“The European Union is not a community of shared values” 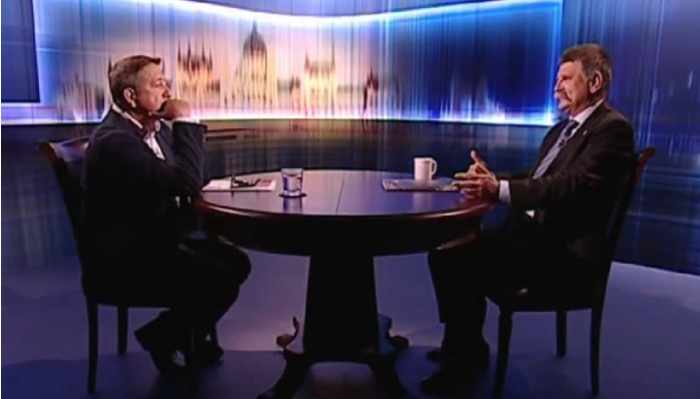 President of the Hungarian Parliament László Kövér (Fidesz; pictured right) says Europe`s migration problems are a sign of the “disintegration of the civilization model created by Europeans”, that the EU, NATO and the US are responsible for the flow of refugees into the EU, and that there is no such thing as “Europe”.

“The fact that people are being killed in the middle of Africa is another sign of the European model of civilization being in a state of crisis because those people were totally fine when they lived their lives without us for thousands of years,” Kövér told Fidesz publicist Zsolt Bayer (pictured, left) during an hour-long interview on EchoTV.

“What I want to say is that everything has its price. What Europe is paying right now is, what Europe is struggling to figure out in this situation, cannot be separated from what Europe did over the past few hundred years, or even what they’ve done in the past few years. To illustrate, I can point at recent examples. African refugees wouldn’t be uncontrollably and unstoppably coming [to Europe] through Libya if certain European and NATO countries wouldn’t have been eager to bomb the Libyan system to pieces. That system was what it was. . . . At least it was a working system. Compared to African standards that system was able to more or less provide its own citizens with a respectable quality of life over a large geographical area. This helped create a wall between Europe and the serious problems of Africa which existed then but at least were contained.”

“Let’s also add that aside from Europe, the United States is also very responsible for the situation in the Middle East,” Zsolt Bayer said, expanding on Kövér’s thoughts.

“Let’s not go any deeper into this,” Kövér responded, “because they might mistakenly drop bombs on us here in the studio. We’re just pointing out the fact that we can talk about Syria and Iraq, too”.

“I don’t think there’s such a thing as ‘Europe’. I think there’s a screwed-up system called the European Union that doesn’t look anything like the system it was created to be,” said the president of the Hungarian parliament, who just weeks ago assured European Parliament President Martin Schulz of Hungary’s unwavering commitment to the EU.

“It especially doesn’t look like what the leftist politicians always emphasize, that [the European Union] is some sort of community of shared values. That’s absolutely not the case. But if that’s what we want, then it wouldn’t hurt for us to sit down again and figure out just what those shared values are.”