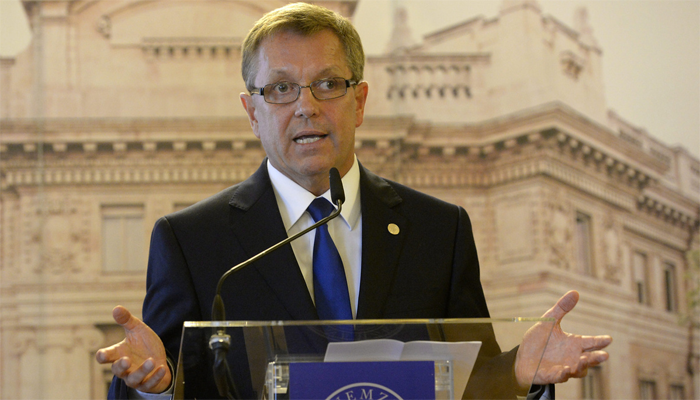 At the end of August 2014 the Hungarian National Bank announced to the astonishment of the banking community that it was using HUF 200 billion (USD 840 million) in “profits” to endow five bank-owned foundations, an amount equal to one and half times Hungary’s annual education budget.  Critics pointed out that, just as Hungarian taxpayers had replenished central bank losses arising from the implementation of monetary policy in earlier years, so should “profits” arising from the central bank’s activities be remitted to the Hungarian treasury.  Others accused the government of using the central bank (MNB) to circumvent the normal state budget approval process.

At the time, central bank governor György Matolcsy claimed the endowment was to be invested in treasury bonds, whose interest in turn would be used to fund the foundations’ activities.  And while some HUF 12 billion (USD 50 million) was used to set up the foundations (including the purchase of a number of buildings this summer, such as the Eiffel Palace office building for which MNB reportedly overpaid), the central bank’s foundations reportedly purchased some HUF 79 billion of treasury notes in September and October from the Government Debt Management Agency (ÁKK).

It now appears that the decision to generously endow the Palace Athéné foundations was not so much driven by a desire to spread Matolcsy’s unorthodox economic gospel as it was to shore up flagging domestic demand for state paper.

According to recent figures issued by ÁKK, August experienced a steep decline in the sale of treasury notes to domestic customers, from HUF 80.6 billion (USD 333 million) in July to HUF 11.4 billion (USD 47 million) in August.  In September, the domestic sale of state paper soared to HUF 101.1 billion.  Over two-thirds of this (HUF 68.1 billion) was purchased by the central bank’s own foundations.  In October they purchased an additional HUF 11 billion of treasury notes, or nearly one-third of the HUF 30.1 billion of state paper sold that month to domestic investors.

444.hu speculates that one reason for the decision to give HUF 200 billion to its own foundations at the end of August was to a) shore up demand for domestic paper, and b) enable Hungary to dress up annual debt figures by arranging for the foundations to “temporarily” assign state paper to the Hungarian treasury at the end of the year, just as MOL Zrt. reportedly did on the last day of 2013.  In this way, according to 444.hu, the government of Hungary can stave off the European Commission initiating a new excessive deficit procedure which, this time, could easily result in the suspension of European development funds on which the Hungarian economy (and the government of Viktor Orbán) depends.

What is not known at this time is the extent to which the foundations may have purchased state paper in the secondary market, either in the interest of shoring up the demand for Hungarian state paper or throwing some business in the direction of Matolcsy’s cousin, Tamás Szemerey whose company, BanKonzult Tanácsadó Kft., is the majority owner of Evobank Zrt..

In October ATV.hu learned from “seemingly reliable market and governmental sources” that the Evobank provided financial services to the foundations and was somehow involved in the purchase of state paper.

444.hu points out that parliament has yet to appoint a new supervisory board, in whose absence György Matolcsy can pretty much do whatever he likes.