The right of asylum has practically vanished in Hungary – Pardavi 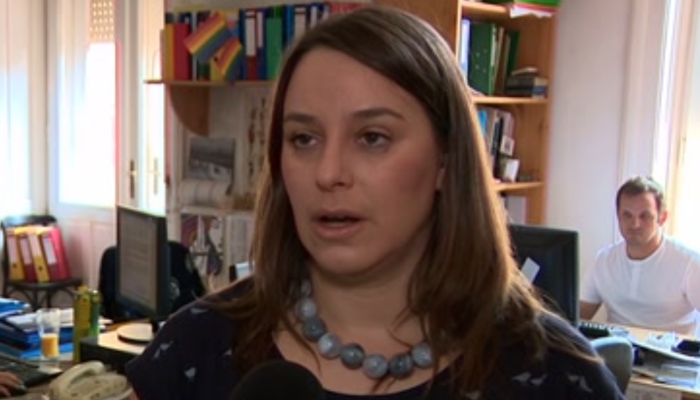 The right of asylum in Hungary has practically vanished because the refugees do not receive adequate care, applications for asylum are not fairly evaluated and very few receive refugee status, Hungarian Helsinki Committee co-chair Márta Pardavi says in her assessment of the status of refugees in Hungary.

By continuously taking alarming political steps, Hungary will soon find itself in the same role as Greece, with one European court after another ruling that it is not a safe place to which to return refugees, says Pardavi, adding that if Hungary continues to visibly withdraw from every common European Union initiative to handle the refugee crisis, it will dig itself deeper in this game of denial.

The refugee expert and legal rights attorney was the first guest to speak Tuesday evening at a discussion held by the Association Helping Refugee Migrants at Budapest’s Gólya Community House.

Pardavi reflected on the fact that only last Tuesday Hungary voted down the refugee quota for distributing 120,000 refugees, and rejected the EU’s offer to compensate Hungary for registering 54,000 asylum seekers.  However, the asylum quota, which has long been on the agenda, was adopted by the European Council over the objection of the central European countries, according to which Hungary must accept 2000 refugees over the next two years.

The black sheep of asylum law

Pardavi said Hungary’s isolation over the refugee issue started on August 1.  From that time it treated Serbia as a safe third country when it comes to immigration matters.  It did so despite there being a consensus among international human rights organizations and the United Nations High Commissioner for Refugees that conditions do not exist in Serbia to ensure that those who require protection receive it.  Nor does EU membership guarantee that a country is safe for a refugee, Pardavi said.

For years Greece has been neither able nor willing to invest anything in the refugee system, she said.  Asylum law was practically inaccessible in the country.  The many reports about inhuman treatment, beatings, conditions bordering on torture, homelessness, police abuse and court cases were the reason the EU member states agreed it was not possible to send people back there. The human rights expert said the last straw was the Strasbourg decision in January 2011, condemning Greece for its appalling refugee support system.  In this way the country was practically left out of the Dublin procedures regulating where asylum applications submitted by refugees entering the EU were to be processed.

Pardavi said the Hungarian government wants to achieve the same and send a message to the refugees not to come here, even as it helps those who are already here to travel on as soon as possible.  The prime minister has already repeatedly made it clear that he doesn’t want to see fewer refugees in the country, but none at all, said the Helsinki Committee lawyer.  By continuously flouting the guiding principles of the European Union, Hungary would achieve being excluded from the Dublin procedure.

It seems that it has already taken the first steps towards this, she continued.  The European Court in Strasbourg for example recently ruled that the asylum application of an Afghan mother in Austria must be processed by the Austrian immigration authorities, and that she should not be returned to Hungary as prescribed by the rules.  The Helsinki Committee believes that Finland and Norway have also stopped returning refugees to Hungary.  Pardavi said this is a warning sign, and previously either the Hungarian immigration authorities or the Interior Minister tried to defend Hungary’s refugee system in their declarations, but they no longer even attempt to do so.

Punishing someone for requesting asylum

Even more alarming than the changes in connection with Serbia as a secure third country, according to Pardavi, is the physical border closure which came into force on September 15.

One of the elements of this is that refugees must submit applications for asylum at one of three containers situated in the transit zone on the border.  From here it is only possible to leave in the direction of Hungary if the application has been approved.  However, there is hardly any chance of this since the applications of refugees arriving from Serbia are automatically rejected because, according to Hungarian regulations, they are arriving to Hungary from a secure country.

One of the biggest problems with the current laws, according to Pardavi, is that it practically makes it possible to detain refugees if they appeal the rejection of their application.  This is what is happening in the case of two men from Bangladesh, who, according to the rules, must appeal the decision within three days to the Szeged court.

The court accepted their application and ordered the Immigration and Citizenship Office (BÁH) to examine the merits of each of the applications.  Until that happens, however, the two men cannot leave the transit containers.  This is practically tantamount to being held captive, says Pardavi, adding that holding someone in a transit zone for this long does not satisfy Hungarian regulations either

The transit zones are open towards Serbia. However, Pardavi thinks it is almost certain that whoever leaves the container will not be let back in, but rather considered to have withdrawn his or her application for legal redress.

What would be the solution?

“We really could not provide for 120,000 people but we don’t even have to, because we would receive international help,” explains Pardavi, who believes that the crisis in Hungary could be handled more humanely.  She did not talk about accepting refugees but rather about registering them and providing temporary accommodation, as provided in the recently accepted burden-sharing plan according to which the task of evaluating asylum applications is to be divided eventually among EU member states.

Pardavi believes a legitimate principle would be that we are a small country and our economy cannot support large numbers of refugees who would depend at the beginning on social supports.  “The problem is that we don’t even want to take in a small number, and all we do is repeat that we don’t want to turn the country into a refugee camp,” she said, adding that “In order to receive assistance from Europe, we should rather emphasize our attempts to protect the refugees to the best of our abilities in accordance with our legal obligations”.

On the European level the Helsinki Committee attorney thinks it would be worthwhile to revive the “temporary protection of refugees” as a legal expression, which would provide them fewer rights than a refugee with pending or accepted status, but it would be faster and easier to obtain.   Refugees would not receive passports but would be free to reside freely in the area of the given country, and would have access to social services. If the procedures were predictable and the member states paid attention to preserving human dignity, then it would be easier to reject those who, unfortunately, according to the current rules were not entitled to refugee status.