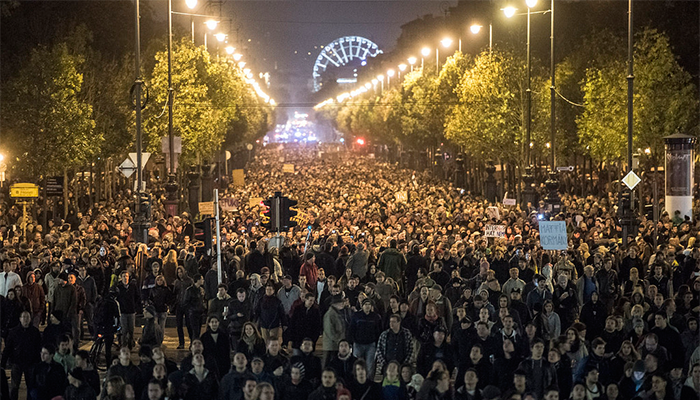 Demonstrators began arriving at Budapest’s József nádor square before 5.30 pm to protest a proposed tax on bandwidth use announced the previous week.  By the time protest organizer Balázs Gulyás took the stage half an hour later, their numbers had swollen to some six or seven thousand.

Gulyás told the crowd that this was not a demonstration against Prime Minister Viktor Orbán, but pointed out there would be no internet tax were Orbán to resign.  To cries of “We won’t allow it!” and “Orbán get out!”, he reminded the crowd that internet service is already taxed at 27% in Hungary, and for this reason it was unacceptable for the government to place a separate tax on bandwidth use.

“The size of existing taxes is brutal,” Gulyás said. “We already pay VAT after internet usage.  We are not going to pay a corrupt government. The governent wants us to get our information from the media they control.”  He asked the crowd to raise their mobile phones as a signal to the world that they cannot be stopped because there are a lot of them and they won’t give up.  The crowd loudly chanted “We won’t allow it!”.

They moved in the direction of Heroes Square, growing to well over 10,000 people. US embassy chargé d’affaires André Goodfriend was seen walking among the protestors wearing civilian clothes and a backpack.  Gulyás called on the crowd not to cover their faces because “this is a legal demonstration”.  When a number of protesters wearing hooded sweatshirts and masks began to lay seige to the Fidesz headquarters, he urged leaving the Fidesz headquarters alone, because the fact that so many people were gathered was enough to get the government’s attention. “We showed them that we are many and they cannot disregard this.  For this reason let us sing the national anthem and go home peacefully.”

“Dictator! We’ve had enough” and “Russians go home” were shouted outside the ruling party HQ. Keyboards, cell phones and computer monitors were hurled, breaking a number of windows. A fence was knocked over.  Three protesters climbed the first-floor balcony and hoisted a European Union flag.

A worried-looking reporter for HirTV bemoaned the complete absence of police.

At 8.25 pm an estimated 300 police arrived and called on the protesters to disperse.  To chants of “The police are with us” and “Shame on you”, the crowd began to go home.  Some made their defiance known by chanting “We’re not going home”.  By 9.30 pm only some 300 protesters remained.