Thousands march in Budapest in defense of retirement savings 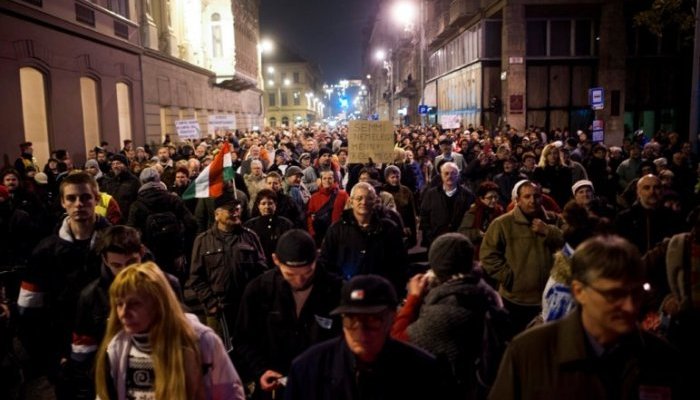 When confiscating some HUF 3 trillion (USD 12 billion) of private retirement savings at the end of 2010, the government promised to give some 3 million private pension fund owners credit for the confiscated savings in the form of individual state pension accounts.  This never came to pass.  Comments made by Minister for National Economy Mihály Varga made it perfectly clear that it is not high on the government’s list of things to do.  In fact, to the astonishment of many observers, Varga denied the government had ever made such a promise.

The “Hands off!” protest organized by a Facebook group calling itself “60,000 for private pension funds” was scheduled to start at 6 pm in Budapest’s József nádor square, which has served as the staging ground for numerous protests over the past month, including last week’s “Day of Public Outrage.”   Some 23,000 people received event invitations, of which some 4400 had RSVP-ed as of 5.30 pm.

Also helping to organize the demonstration was the so-called “Epoch changing party” whose economic director Levente Pápa announced on that party’s website that the government planned to spend the confiscated proceeds on “the luxurious expenses of Fidesz friends and on football stadiums”.

As of 6 pm only some 1000 protesters had arrived.  An additional 2000 or so arrived during the following 15 minutes.  Informed that the event was a quarter of an hour delayed, protesters waited patiently, many holding banners saying “We’re out of patience” and “We only care about the money, not about you”. 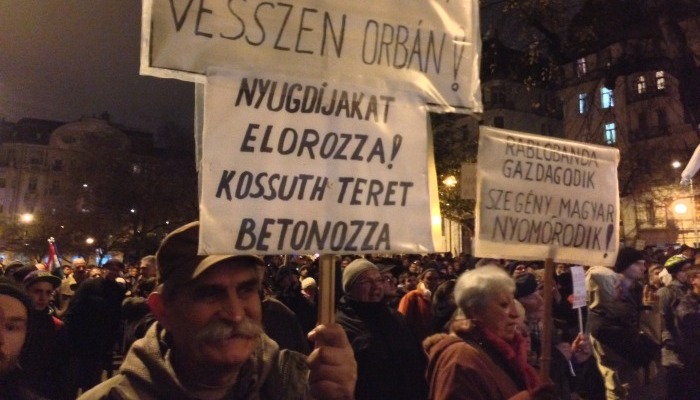 Shortly after 6.15 the first speaker, Zoltán Büki, addressed the crowd. He pointed out that the government intended to appropriate another HUF 200 billion of private pension funds.  “If this continues, they’ll end up nationalizing our toothbrushes!”  He demanded the resignation of “corruption” NAV directors.  The crowd responded with shouts of “Orbán be gone!”.

The next speaker demanded the government “keep its hands off of our pensions, our savings”.

The organizer of last week’s “Day of Public Outrage”  demonstration reportedly declined to speak after learning that politicians were among the organizers and speakers of the event.

At 6.22 the crowd departed in the direction of the Hungarian National Bank.   An estimated 4000 filed past Saint Stephen’s Basilica on their way to Freedom Square.  There the crowd learned that the value of the remaining private retirement accounts was around HUF 200 billion, and that the movement has 61,000 members for average private retirement account savings of HUF 3.2 million (USD 13,000) each.   Former MSZP spokesperson Zsolt Török and MSZP deputy chairman Zoltán Gőgös were present.  A vehicle equipped with speakers condemned central bank governor György Matolcsy as “a liar”. 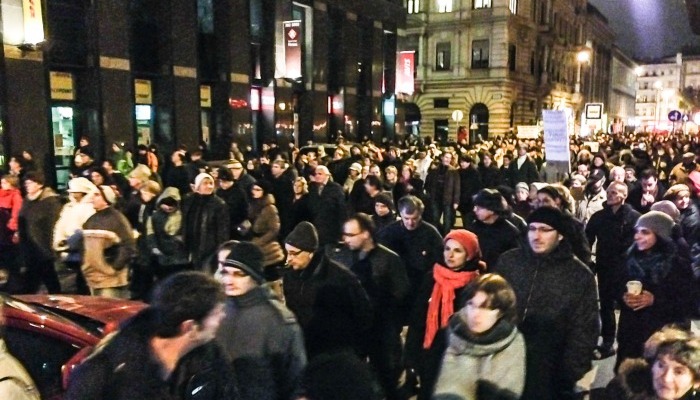 From there protesters marched down Alkomany street in the direction of parliament, continuing to gain in size.  While marching, members of the crowd chanted “We want Europe, democracy!”, “Dirty Fidesz, Orbán get out!” and “Graverobbers!”, while carrying banners with “Band of thieves”,  “Orban, go away and take all of your friends” and “The fish rots from the head down”.

Reaching the end of Alkomany street, event organizer Tibor Kárpát demanded individual state pension accounts from the government, “which lied”.  Tibor Kárpát told the crowd that “the kitten had taken the HUF 3 trillion confiscated from private pension plans at the end of 2010, pointing out that the money obviously went to good use because “there are plenty of stadiums and billionaire gas fitters” (referring to rags-to-riches Felcsút mayor Lörinc Mészáros).  He told the crowd the national government needed the remaining HUF 200 billion in private retirement savings to “build stadiums and upscale residential parks” and that “for this reason we need help from Europe against our own government”.

Event organizer Zoltán  Vajda asked whether the crowd wanted to entrust its money to the government.  Parodying NAV president Ildikó Vida’s visit to the US embassy this month, Vajda said he would “ask for a translator” if the crowd didn’t shout “no” loud enough.

“The prime minister thinks the crowd is stupid but we won’t allow it.  They squandered HUF 3000 billion.  Now they want to take away the remaining HUF 200 billion.  What’s next?  Grandmother’s jam?” Vajda asked the crowd.

He called on them to tell the government “Don’t spend this money”.

“We had to learn from Mihály Varga that private pension account owners are ‘fictive’ members.  This is a lie and outrage.  HUF 3 million is not fictive if not squandered on pheasant hunting in Slovakia, weekends in London, garages in Pasa park or PM shitty stadiums.  Orbán is the fictive one.  As well as (Fidesz caucus leader) “Toni” Rogan, (Prime Minister’s Office Chancellor Janos) Lázár, (Minister for National Economy) Mihály Varga and (Fidesz vice-chairman) Lajos Kósa.  Not the members of the private pension funds,” he told the crowd.

Calling on everyone to write a letter to Varga and to sign a petition, Vajda announced that another demonstration would be held in December.  The demonstration closed with the singing of the national anthem, whereupon the crowd started chanting “Orbán get out!”