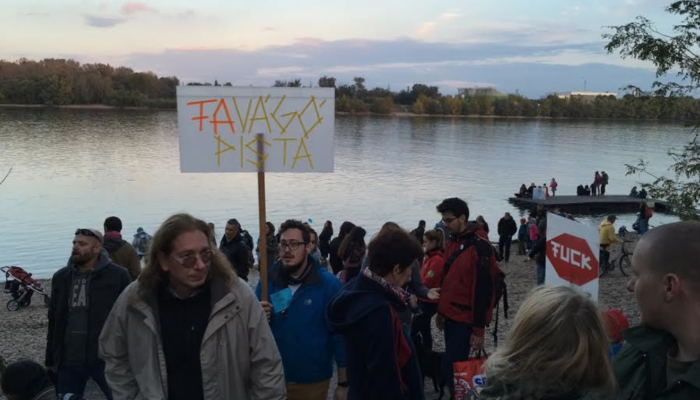 A demonstration Sunday against proposed construction of a mobile dam at Római-part, one of Budapest’s most valued outdoor spaces, drew thousands of participants, reports 444.hu.

The demonstration was organized by Facebook group “The Trees Should Stay On Római” (Maradjanak a Fák a Rómain) in protest of plans to build the dam along the iconic stretch of the Danube, which would displace many traditional bars and restaurants and remove all of the trees along the more than 1 kilometer-long natural shore. The stated purpose of the proposed dam is to protect the “summer houses” in the flood-prone area from the Danube’s rising waters. However, critics argue that these are not summer homes at all, but illegally built luxury residences and hotels that are being protected at the expense of the natural and cultural environment.

The protesters were comprised of mainly Római residents and people from nearby Óbuda, reports 444.hu.

Critics say the plans as they are would involve the total destruction of Római-part, and would not even guarantee the safety of the nearby residents from flood. Budapest Mayor István Tarlós has acknowledged that after the standard flood level was raised, in some cases to 4 meters, the mobile dam creates the risk of hydraulic fracturing. With the higher dam, a deeper substructure must be placed into the ground, the weight of which could act with moving floodwaters to move the subsoil and lead to dam failure. Additionally, problems could arise from larger debris being carried down the Danube colliding with the dam, breaking it.

The proposed dam would only serve to protect a very thin band of largely illegally built structures between Római-part and Királyok útja, something critics have said gives undue privilege to wealthy speculators and investors with interests in the area. According to demonstrators, a more effective dam could be built along the Nánási út/Királyok útja line, further inland from the shore, and save the cultural and natural features of Római-part.

“This madness has to be stopped,” said engineer and local civil activist Ágoston Ébert at the demonstration. Ébert says he has lived for 50 years on the protected side of the proposed dam, and therefore is not a “catastrophe tourist” but really has an interest in the fate of Római-part. He, too, thinks the dam should be built further inland, but has reason to hope that commonsense will prevail, based on a couple of weekly statements by Tarlós suggesting “maybe something moved” in the mayor’s office.

Péter Keleti closed the demonstration by saying that activists had to be on guard over the winter in case trees are cut down under the pretense of changing underground drinking water pipes that run beneath Római-part. Keleti added that in Europe’s great cities, people would be licking their lips if there was such a natural riverside near the city center, and many cities go to great expense to break up quays to create such spaces.

“We, on the other hand, are getting ready to destroy the unique Római part,” Keleti said, pledging that activists would be on patrol through the winter to ensure no suspicious pipe-changing takes place.