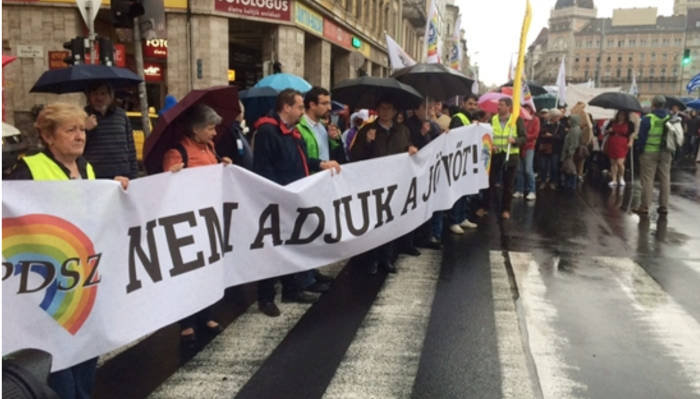 Despite pouring rain several hundred protesters participated in the “We won’t give over the future!” demonstration jointly organized by the Teachers Democratic Trade Union (PDSZ) and civil umbrella organization Human Platform.  Frequently mentioned was the fact that most teachers must live on HUF 69,000 (USD 250) a month.  Among other things, PDSZ is demanding immediate wage increases, a stop to school closures, and the restoration of the autonomy of universities.  A full list of their demands can be found here.

The opening speech was delivered by Mária Sándor, the initiator of the Nurses in Black protest movement, who expressed solidarity with the teachers.  She said that as a parent she was also affected by the dismemberment of the quality school system, warning that the training of nurses had virtually ended in Hungary.  She drew a parallel between the current situation and the time of the Hungarian revolution of 1848-49 when Zsuzsanna Kossuth, the first Hungarian nurse, created hospitals in the camps.  “Today we are the last nurses, and the circumstances in which we must work are similar to that.”  After applauding her speech the crowd started chanting “We won’t give over the future, we want our schools back!”

Afterwards the crowd moved from the Blaha Lujza square to the Szalay street in front of the Ministry for Human Resources.

Most of the protesters were older and middle-aged people, a number of them seeking shelter from the rain before reaching their destination in front of the Ministry for Human Resources, where they were received by the dark windows and a closed entrance.  While the stage was being prepared, an older demonstrator managed to detect a few people inside the building looking out at the protesters.  “Are you the human resources?” he asked sarcastically.

Civil activist Zoltán Vajda addressed the crowd in his capacity as a father as well as one of the authors of the so-called “system-destroying referendum” announced in March.  He said that in the event the referendum against the Fidesz government is successful, it will be used to “stop [Prime Minister Viktor] Orbán” and to protect the school system, and called on the demonstrators to support their efforts.

He was followed by Tamás Wittinghof, the independent mayor of Budaörs, who said that, while wages were insultingly low, the larger problem was the fact that the right to make decisions had been taken away from those who want to accomplish things.  He said that as a result of KLIK [the government department in charge of education] and the ministry, “today a school director cannot even decide who to hire as a cleaner.”  However, he was encouraged to see that “civil courage had not died out in the country” and called on the trade unions and civil organizations to cooperate on a broader range of issues.

He was followed by the well-known educator and poverty activist Nóra L. Ritók, who gave an emotional and shocking account of the growing crisis in the schools in north-east Hungary, where more and more teachers and school directors are experimenting with segregation when it comes to Roma students.  She demanded to know how many disadvantaged students the religious schools were teaching, as the number is very few in her estimation.

The fate of the Corvinus University was addressed by university lecturer Dániel Deák and two students who expressed their opposition to government plans to sell the area of the Buda campus belonging to the college of gardening. 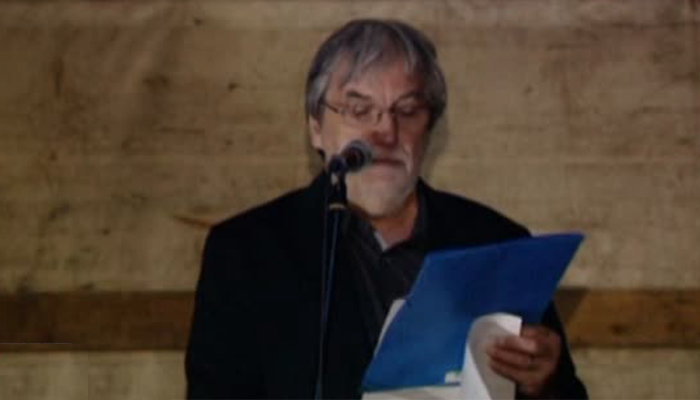 PDSZ president László Mendrey was the last to speak  He summarized the demands made in the previous speeches and informed the crowd that the previous day they had delivered a petition to the Office of the Prime Minister.  He also spoke about how difficult it was to organize any real civil opposition when the government had practically eliminated the the right to strike, and when society was so atomized as to be incapable of solidarity.

A number of teachers are expected to attend a May 29th protest by social workers.