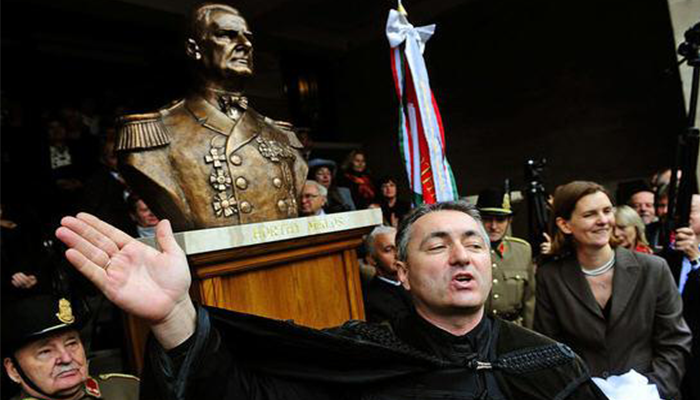 The tribunal of the Budapest-North Diocese of the Hungarian Reformed Church has concluded its hearings over controversial Reformed Church minister Lorant Hegedus Jr. who unveiled a bust of Hungary’s wartime leader in front of his church after delivering a fiery sermon last year.

Hegedus is married to a Jobbik member of parliament (pictured above to his right).

After two months of deliberations the tribunal gave Hegedus a written reprimand–the  second mildest form of judgment it could have issued according to index.hu.

Some sympathizers were happy Hegedus did not receive a harsher judgement.  Others said the tribunal judges would not have dared pass a harsher sentence given the number of supporters in the room.

Hegedus intends to appeal the verdict.

In January the church tribunal’s prosecutor, Gyorgy Horvath, said he would fight to see Hegedus defrocked. It is not known at this time whether Horvath intends to appeal the verdict.

On 3 November 2013 Hegedus unveiled a bust of Admiral Miklos Horthy in front of the Church of the Homecoming at Freedom Square in downtown Budapest after delivering a sermon attended by numerous far-right politicians and activists.

Thousands of protesters gathered outside the ceremony, many wearing yellow Star of David patches. Hungary’s wartime regent bears much responsibility for the deaths of half a million Hungarian Jews during the Second World War. It was only at Stalin’s insistence that Horthy was not tried for war crimes.

Hegedus claims the charges brought against him by the Hungarian Reformed Church tribunal “collapsed” because tribunal judges did not consider the statue’s unveiling to be an issue, and also because the tribunal could not determine that the ceremony was of a political nature.

Hungary’s state-run media agency reported that the tribunal condemned Hegedus’ actions because he had violated the ministerial law which forbids church leaders from “dividing the community, inciting hate, or doing something that conflicts with clean morals.”

Hegedus spoke at a press conference after the tribunal’s decision was announced. He said he rejects the tribunal’s judgment on grounds of it being the product of a “loveless verdict”. Jobbik MP Tamas Gaudi-Nagy was also in attendance.  Gaudi-Nagy considered the judgement to be victory.

The press conference concluded with a singing of the Hungarian and Szekler anthems.