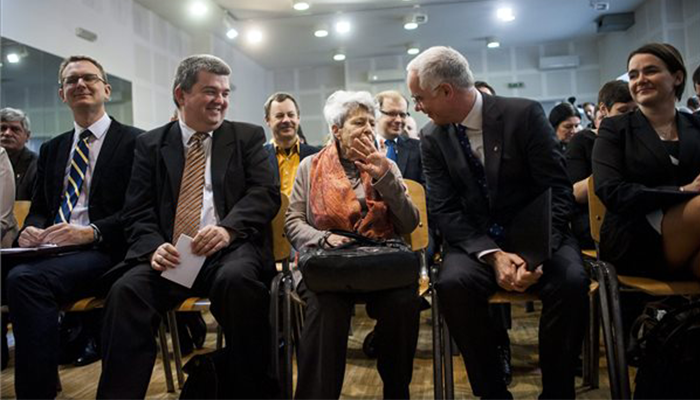 Hungary’s Minister for Human Resources, Zoltan Balog, a Calvinist minister and theologian with no formal training in either economics or sociology, presented the government’s “view” of poverty in Hungary at a conference on Tuesday in Budapest’s 8th district entitled “Poverty in Hungary: possibilities, opportunities in 2015”.

He stated the government’s conviction that every person is responsible for himself, his children and his family, and for this reason must do everything possible to overcome the difficult situation.

Reportedly the minister proposed a new kind of expert discussion with experts into combatting poverty.  (The Budapest Beacon was not invited to attend the event so we do not know to what extent he went into details-ed.).

He compared Hungary’s social spending with that of other Central European countries.  Hungary spent 21.3 percent of its GDP on social expenditures, more than Czech Republic (20.2 percent), Slovakia (17.9 percent) and Poland (17.6 percent).  However, he acknowledged that this was less than the EU average of 28.3 percent.

He mentioned that families with three or more children whose adult members are unemployed receive HUF 30,000 more now than in 2010 providing one child is in school and the other two are in kindergarten, and the parent is engaged in public work (sic).

Balog said that during the current EU financial cycle HUF 32 billion had been allocated for material relief, such as food packets for the poor.  He said the current plan was to provide free school lunches to the children of families whose per capita income is less than 130 percent of minimum wage, adding that this meant at least two-thirds of kindergarten and school age children will receive free school lunches.

Hungarian sociologist Zsuzsa Ferge, an ardent critic of the social policies of the second and third Orbán governments, expressed her doubts over the expected results and accused the government of seeing things through “rose-tinted glasses”.   She said the data may indicate some improvement here or there but on the whole “the problems are worse than before.”

According to Ferge, in 2008 Hungary was the only country affected by the world financial crisis that did absolutely nothing to help the victims of the crisis.   She said the country is in terrible condition.  “Those who are bad off are going to be worse off.  Those who are well off are going to be even better off.”  She said that on the basis of the data she had seen, income inequality has grown rapidly since 2010 and the cycle of poverty seems unstoppable.   Citing a French study, she said that those living in very difficult circumstances are not able to break out of poverty on their own without help and support of some kind.   She expressed her concern that the material aid Balog mentioned would fail to reach the families most in need.

Károly Czibere, undersecretary for social and societal matters, stressed that the first element of social secuirty was economic growth and strengthening of employment.  He said public work was not a goal but a temporary method of providing income which serves the purpose of weaning people from welfare by providing them with the opportunity to work.  He said the goal was to improve changes of employment and entering the primary work market.

The undersecretary thought it important to reject the notion that those not employed in public work would be excluded from receiving social support.  (If the undersecretary mentioned that in the future impoverished local governments would decide on matters of welfare payments, it was not reported in the mainstream press-ed.)

According to material handed out to reporters there was no increase in child poverty for the past three years. According to Eurostat figures (which are based on figures supplied by the government) the number of children living in poverty is around 23 percent, which means 400,000 children in Hungary.   According to the material the latest KSH data indicates that 31.1 percent of Hungarians lived under threat of poverty or social exclusion in 2014, that is 3,044,000 people.  This represents a decrease of 2.4 percent (214,000 people) from the previous year.