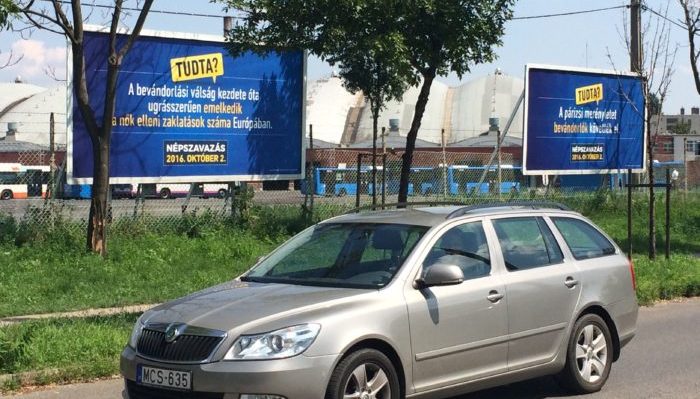 The referendum poses the following question to Hungarian voters:

“Do you want the European Union without the consent of the Hungarian parliament to prescribe that it be mandatory to resettle non-Hungarian citizens in Hungary?”

The two big questions are whether enough voters will turn out for the referendum to be valid (the threshold being 50% plus 1) and what the outcome will be.

According to a poll conducted by Hungarian news website Index.hu, there is a good chance of success for the government. Of all the people asked, 54 percent said they planned to participate in the referendum, 23 percent were undecided, and only 19 percent said they would opt for a boycott.

Of the 54 percent who said they would go, the majority will vote “no” to the migrant settlement quota.

The government’s anti-migrant propaganda also seems to be working. In a separate poll, two-thirds of respondants said migrants posed an imminent threat to their families. When asked whether the European Union was responsible for the migration crisis, 55 percent agreed. The same percentage of Hungarians also believe that Brussels limits the sovereignty of the country.

Meanwhile, the government’s anti-migrant political campaign is only beginning. Fidesz faction leader Lajos Kósa has already suggested that the billboards and TV ads are not even part of the official campaign scheduled to start on 13th August.

Opposition parties will soon also have to decide whether they want to have advertisements of their own. Hungarian election law stipulates that every party have the opportunity to place ads on state TV and radio channels before referendums, expressing their own opinions.   However, of the so-called democratic opposition parties, only the Hungarian Socialist Party (MSZP) and Politics Can Be Different (LMP) were able to form parliamentary delegations after the 2014 general election.  Although certain opposition politicians from Democratic Coalition, Együtt (Together), Dialogue for Hungary (PM) and the Hungarian Liberal Party (MLP), entered parliament on party lists, they are technically independent, their parties having failed to clear the 5 percent threshold necessary to form a parliamentary delegation.

Placing free advertisements on state television and radio is strictly regulated by law.  First of all, every party must have the same amount of time, 50 minutes for each. It is for them to decide when they want their campaigns to start, but when they do, state media has to play them three times a day.

Hungarian daily newspaper Magyar Nemzet asked parties if they planned to avail themselves of the opportunity to advertise on state television.  The only one to answer in the affirmative was radical right wing Jobbik. Dániel Z. Kárpát, deputy head of the party, told the paper that they would ask their voters to go and vote “no”.

The Hungarian Socialist Party (Magyar Szocialista Párt – MSZP) and Politics Can Be Different (Lehet Más a Politika – LMP) have yet to make up their mind, wrote the paper.