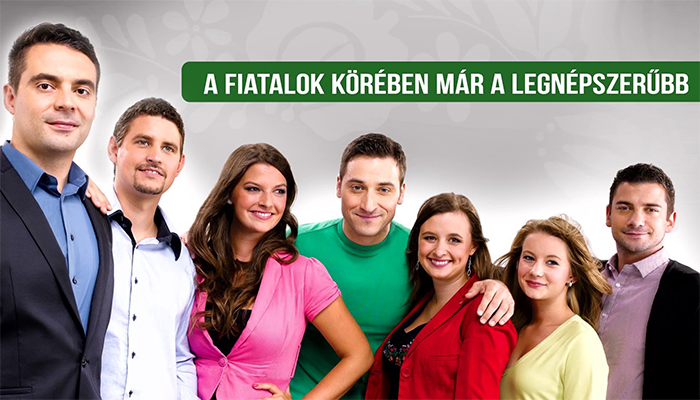 Jobbik campaign ad: “Already the most popular among youth”

According to a poll conducted in February, far-right party Jobbik was more popular than right-wing, ruling Fidesz among Hungarians under 30.  The reasons for this were debated last week at a forum organized by Kettős Mérce (Double Standard).

Kettős Mérce editor István Pap Szilárd opened the debate with data showing 20 percent of people under 30 supporting Jobbik and 16 percent supporting Fidesz.  Anikó Félix, sociologist at Budapest’s ELTE university, said 20 percent is a lot but most young people have no party preference.  She said that when it comes to the subject of politics, Hungarian youth are more interested in civil organizations or student networks. Félix said Jobbik offers politics of a non-political kind, and this is apparent in the name of the party: Jobbik, Movement for a Better Hungary. Besides, Jobbik’s success might be related to their anti-establishment attitude.

Too much or too little?

Attila Juhász, chief analyst for Political Capital, thinks this number is high as a percentage of politically active young adults, but not that remarkable in comparison to all the young people. He said that so far Fidesz led among people of the mentioned age, but as Fidesz became weaker, Jobbik took the lead. He emphasized that a party opposed to the current government, such as LMP or Jobbik, is best able to reach young adults.

Dániel Róna, political scientist at Budapest’s Corvinus University, said Jobbik’s popularity has grown across the board, and in the case of people under 30 this figure is over 30 percent, which he believes is very high.

Félix attributes Jobbik’s success to the fact that it offers youth a communal identity.  Juhász says Jobbik’s against-government attitude is very palpable. They both think that Jobbik is considered a movement or a community rather than a party–a chance to become somebody, as Juhász put it.

In addition, Jobbik offers an explanation for the world by blaming others. It sets out good and bad, proposes solutions and organizes youth camps, says Róna, pointing out that in the northern city of Miskolc anybody interested in politics automatically chooses Jobbik. He also cited the example of the young person who signed up for Fidesz in 2007, received no reply and chose Jobbik instead. Róna said far-right website Kuruc.info is an important point in this community.

In the countryside, half of the members of Jobbik’s youth movement are under the age of 18, so it is clear that the party is popular outside the group of 18- to 30-year-olds.

It is not clear whether Jobbik will retain its popularity in the long run, said Róna.  On the one hand there is a social element to this, which may result in their supporters remaining loyal.  On the other hand the fact that Jobbik is most popular among youth suggests its phenomenon may be temporary.

The politics of prejudice

Jobbik communicates its scandals very smartly, so the other parties cannot do anything about it, Félix continued.  Prejudice and anti-Semitism in Hungary strengthen Jobbik even more.  Jobbik has earned more support by its anti-Gypsy campaign, but the youth who support the party are not necessarily against Gypsies. They have a wide frame of ideology that contains racism but it is not their only ideology.

There are some people who have no political preconceptions, voting for Jobbik because they see the party as the strongest opponent of Fidesz, Juhász said.

It was also mentioned that while Jobbik declares itself a party based on Christianity, most of its voters are not religious.  Nor are they sympathetic to Russia or skeptical of Europe.

Félix said that even though Jobbik is quite homophobic and opposes immigration, their audience is neither more homophobic nor anti-immigration than the rest of Hungarians.

Economic crisis may strengthen Jobbik but its intensity cannot be blamed only on the crisis, said Juhász, who believes the murder of Gypsies in Olaszliszka and Veszprém had a lot to do with Jobbik’s power growth.

The Budapest Beacon asked Anikó Félix whether it is worth voting for Jobbik, since Fidesz offers the same or nearly the same program, especially when it comes to education, culture, art, ideology, approach of history, symbolic matters and Hungary’s relationship with Russia. She told us there is indeed a huge overlap in the two parties’ ideologies in this subculture. There is a large debate over who started this nationalist, ethnocentric subculture, Fidesz or Jobbik.  At the so-called Countrywide Session of Hungarians held in Kurultáj or Bösztörpuszta, the two ideologies–nationalism and ethnocentrism–mix quite a lot.  Present at these events are subcultures from extreme skinheads to Fidesz.

According to Félix, Jobbik tries to underplay radicalization to win the voters Fidesz loses, practising a double communication that speaks to their traditional base and to moderates as well. Félix said it was clear from a recent recording of Jobbik vice-chairman Tamás Sneider that Jobbik was using the radical youth movement Hatvannégy Vármegye Ifjúsági Mozgalom and the right-wing hate group Betyársereg (Army of highwaymen) to retain its radical supporters, even as it moderated its politics.  She said this is the precise reason Jobbik stood behind Sneider.

Although Félix does not believe that Nazi ideology makes a good basis for a political campaign, she acknowledges that social and civil movements can be effective.