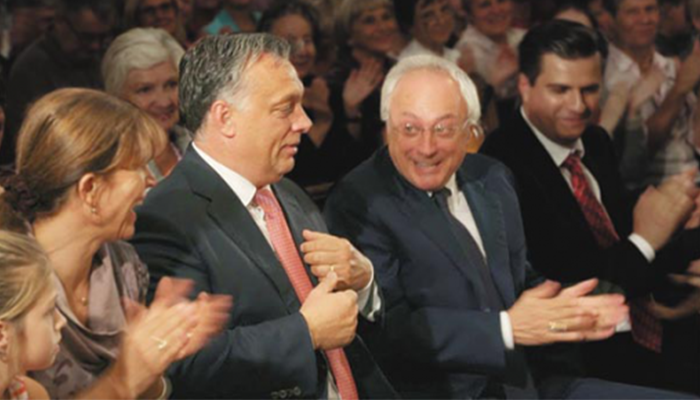 Prime Minister Viktor Orbán has made numerous trips to Switzerland as of late. While true his daughter Ráhel studies in the banking capital of the world, the Prime Minister’s visits take place in the company of Hungary’s ambassador to Switzerland, István Nagy. Hungarian news website Vasárnapi Hírek says the government of Hungary would like to keep Nagy’s resumé out of the public arena. There are, however, certain interesting peculiarities surrounding the life of the ambassador.

According to Vasárnapi Hírek, Nagy is a man with quite the reputation in the Middle East. The diplomat formerly worked as a banker. While not citing its sources Vasárnapi Hírek tells readers that every person they spoke to agrees that Nagy is Prime Minister Orbán’s Swiss banker.

The banker-turned-diplomat arrived in the United States as a refugee in 1956 and started his career in the financial sector.  But it was while working for the Audi Bank headquartered in Lebanon that his career reached true heights.  The bank was founded together with the Audi clan of Lebanon, one of the country’s richest families. Audi Bank’s reputation is not restricted to the Arab world, having subsidiaries in many countries, including Switzerland, where István Nagy served as the CEO of Audi Bank’s Swiss branch between 2005 and 2012.

Kékessy was the one to introduce Nagy to Viktor Orbán, writes Vasárnapi Hírek, and by 2010 Orbán would have appointed Nagy ambassador to Bern but Nagy was reluctant to leave Audi Bank. Despite this, Orbán did manage to involve Nagy in the Hungarian government’s activities, making him responsible for Hungarian-Arab business development. Vasárnapi Hírek writes that Nagy’s role in the Hungarian government may have been why Orbán traveled so frequently to Lebanon and Saudi Arabia.

Nagy retired from Audi Bank in 2012 and was soon appointed Hungary’s ambassador to Switzerland.  From Bern, he continued to use his connections in the Arab world to help Hungary’s government.

According to Vasárnapi Hírek, when the Saudi Arabian court did not want to receive Orbán at its highest levels, it was Nagy who intervened to smooth things over enough to secure a personal meeting between Orbán and the king of Saudi Arabia. Had that not been the case, Vasárnapi Hírek writes, it would have made no sense for Nagy to be present in the delegation visiting Saudi Arabia.