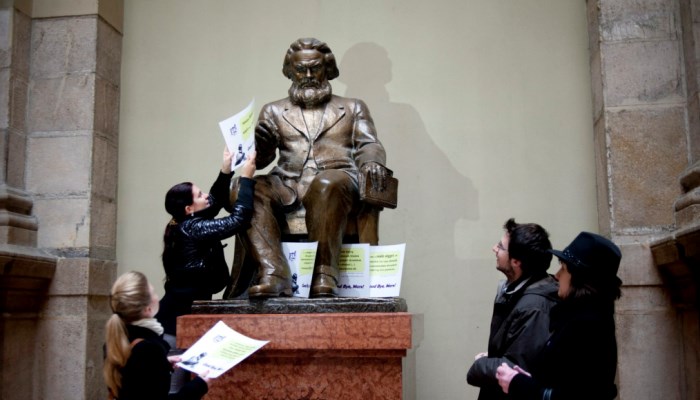 The sudden decision to remove the statue of Karl Marx from Corvinus University of Economics two weeks ago was followed by media silence from the Budapest institution’s administration. However, Corvinus rector Zsolt Rostoványi clarified the statue’s fate: the statue will remain on campus in a new location.

The rector explained that the main entrance of the university will be reordered for an exhibition documenting the institution’s history at the end of September. For this reason “not just the Marx statue will need a new location but also all of the commemorative plaques”.

In an official statement Rostoványi said “interpreting the history of the statue according to everyday politics would be a misstep”, adding that he had raised the issue of finding a new defining symbol for the university’s main entrance “long before” the Fidesz election victory of 2010.

The removal had been interpreted as the result of pressure from governing party youth organization the ‘Young Christian Alliance’. Christian Democratic Party vice-president Bence Rétvári has meanwhile argued that Marx was a “propagator of hate speech” and the “founder of a totalitarian political movement”.

Corvinus was renamed Karl Marx University in 1953 and was known for producing the country’s Marxist intellectual elite in the socialist era. However the institution became a hub for anti-communist dissent during the late Kádár regime. Renamed after the 15th-century King Matthias Corvinus in 2003, its economics faculty was one of Hungary’s best until 2011, when the Orbán government founded its own University of State Services (Nemzeti Közszolgálati Egyetem), which swallowed up its civil service departments. Its political tradition continues: Corvinus students were highly active during the 2012-13 student protests against the government’s tuition fees, and partly limited their introduction.

Critics of the Marx statue say the university has not been willing to face its darker legacy as Hungary’s leading institution of the state socialist era. Defenders of the statue argue that Marx’s works were not directly related to any crimes committed by later communist regimes.