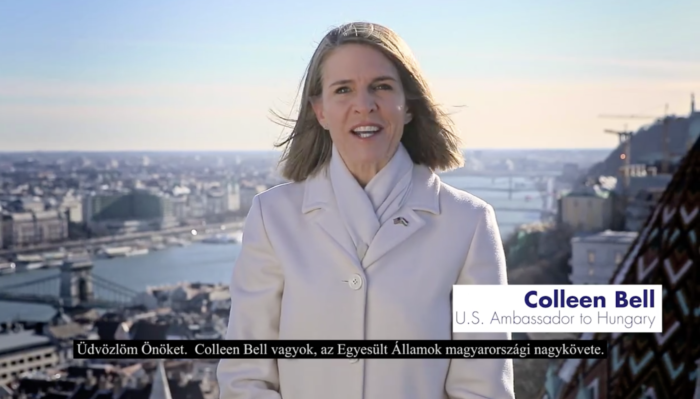 “I have worked tirelessly with your leaders to create a constructive dialogue to reach our common goals. Friendships based on shared values and mutual respect are those friendships that will endure.” – Colleen Bell, United States Ambassador to Hungary

US Ambassador Colleen Bell has officially bid farewell to Hungary in a video posted to the embassy’s Facebook page. After describing the extent of her travels and encounters in Hungary, Ambassador Bell shares what she considers to be her legacy.

“I’m proud of the progress we’ve made on many important issues, including increasing trade, promoting our commercial ties, strengthening our security and law enforcement cooperation, and deepening our cultural and educational exchanges. I have worked tirelessly with your leaders to create a constructive dialogue to reach our common goals. Friendships based on shared values and mutual respect are those friendships that will endure,” said Bell, who is expected to formally resign her post later this week.

“It’s been an extraordinary privilege and honor to be President Obama’s representative to your country, and I’m grateful to you for all of the kindness you’ve shown me and my family during our time here,” said the ambassador at the beginning of her farewell video. “As I reflect on my experiences in Hungary, I focus on the wonderful people I’ve met, the amazing culture I’ve come to enjoy, and the incredible history I’ve learned to appreciate.”

Ambassador Bell presented her diplomatic credentials to Hungarian President János Áder on January 21, 2015 after finally being confirmed for the post by the United States Senate in December 2014, nearly one year after she testified before the Senate Foreign Relations Committee on January 16, 2014.

Hungary’s ruling party and its media hinterland immediately took her to task for her opening statement to the committee expressing concerns over democratic backsliding under the second and third Orbán governments, from the 2010 election. Within days of her testimony pro-government daily Magyar Nemzet published an accusatory open letter from the poison pen of Fidesz MP Gergely Gulyás, Prime Minister Viktor Orbán’s point-man in parliament.

Later that year, just as the Senate was about to vote to confirm her appointment, Senator John McCain (Republican, Arizona) objected to appointing yet another major Democratic Party fundraiser for Barack Obama from the state of California as ambassador to Hungary instead of an experienced member of the diplomatic corps.

“I am not against political appointees,” McCain told the Senate. “I understand how the game is played. But here we are, a nation that’s on the verge of ceding its sovereignty to a neo-fascist dictator, and we’re going to send the producer of ‘The Bold and Beautiful’. I urge my colleagues to stop this foolishness. I urge a ‘No’ vote.”

Ambassador Bell arrived in Budapest at a low point in relations between the United States and Hungary following a State Department decision to ban several Hungarian officials suspected of complicity in corruption from entering the United States, including the then-head of the Hungarian tax authority (NAV) Ildikó Vida. Orbán responded to the travel ban by calling for Andre Goodfriend, acting chief of the United States’ mission to Hungary, to be tried for defamation, a crime carrying up to a three-year jail sentence. Hungary’s foreign ministry even went so far as to ask the United States to lift Goodyear’s diplomatic immunity from prosecution.

Bell’s arrival (and Goodfriend’s subsequent departure) appeared to usher in a period of improved bilateral relations (although Hungarian Minister for Foreign Affairs and Trade Péter Szíjjártó has indicated otherwise). Although Ambassador Bell continued to speak out against corruption, most notably in a speech delivered at Corvinus University, most of her time appears to have been spent mending fences behind the scenes.

Her departure follows the defeat of Democratic candidate Hillary Clinton in the US presidential election in November by Republican candidate Donald Trump, whose inauguration will be this Friday, January 20 in Washington.

Here are some pictures from her farewell video: