US Ambassador Colleen Bell to tender her resignation on January 20th 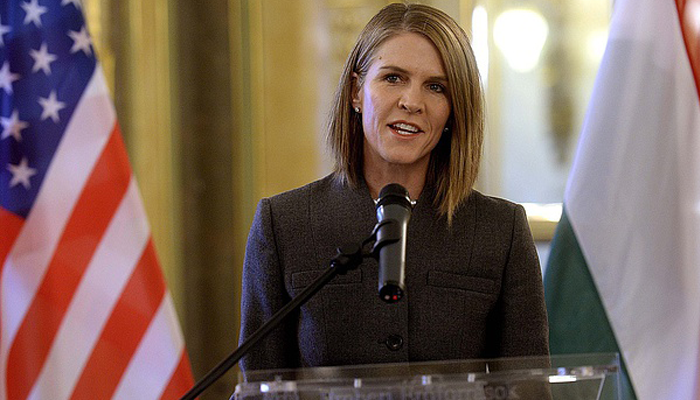 “I would like to stay as long as possible. Naturally I serve the president, and on January 20th, together with the other ambassadors, I will submit my resignation.” – US Ambassador to Hungary Colleen Bell

US Ambassador to Hungary Colleen Bell has confirmed in an interview with weekly magazine Figyelő that she will be stepping down from her post early next year.

The announcement comes only two weeks after Bell denied reports in Magyar Nemzet that she would leave the ambassadorship regardless of the outcome of November’s general election. “Nothing could be further from the truth,” Bell said of the article. “I’m not going anywhere in the foreseeable future.”

In her interview with Figyelő, Bell said she will tender her resignation on January 20, the day of inauguration of the new US president.

“The President will decide whether he accepts [my resignation], or whether he will keep me in this position until the new ambassador arrives,” said Bell, a former Hollywood television producer who was reportedly one of US President Obama’s top fundraisers in his 2012 campaign. “I really enjoy this work and I still have a lot of things to do.”

Bell has been ambassador since January 2015, a period marked by a distinct cooling in relations between the United States and Hungary.  Often critical of the Orbán government, Bell has been criticized by Fidesz for speaking out against official corruption and democratic backsliding in Hungary.

If the new US president accepts Bell’s resignation, the US Embassy’s Deputy Chief of Mission, David Kostelancik, will temporarily take over her duties as Charge d’Affaires until a new ambassador is appointed by the president and confirmed by the Senate.

The appointment of Kostelancik, the former Director of the Office of Russian Affairs at the Department of State’s Bureau of European and Eurasian Affairs, has raised eyebrows. He is deeply familiar with the post-Soviet sphere, and served for many years in the US Embassy in Moscow.