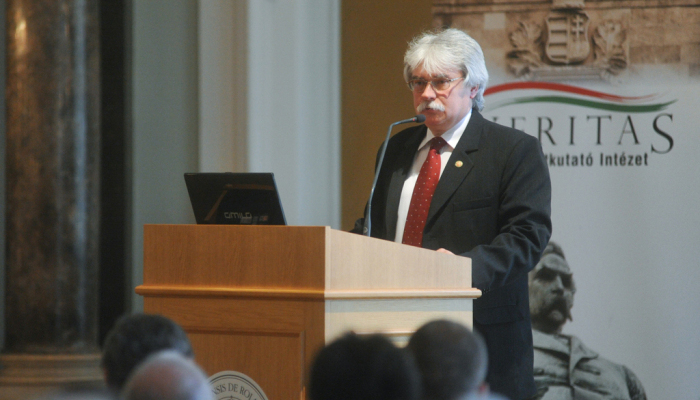 The government-funded Veritas Institute for Historical Research led by revisionist historian Sándor Szakály says it will represent a “new historical truth” when it holds its second conference ever in Parliament on Monday.

The institute held a press conference ahead of the event on Thursday before an audience of mainly pro-government journalists. Veritas director Szakály said it will try and be more inclusive by holding monthly debates, issuing a yearbook and holding regular nationwide and international conferences on topics of public interest, because Veritas has been a target of “many uninformed attacks in the past”. Veritas wants to differentiate between the inter-war Horthy regime and the era of Hungary’s German occupation, and present its version of the country’s history post-1945, he added.

“From Occupation to Occupation” will feature a wider variety of historians than its debut conference, which interpreted the events of 1989. Keynote speakers will be Fidesz House Speaker László Kövér and former Hungarian Democratic Forum prime minister Péter Boross.

As well as Second World War military history and the loss of Jewish lives and property during German occupation, guest speakers will discuss atrocities and violence against civilians – especially women – carried out by the invading Soviet Army in 1945.

Boross, who is the body’s advisory board head, said Veritas is necessary because it expresses the “historical truth” of the Second World War and Communist regime, which were misrepresented after 1989. Veritas can ensure that “the spiritual trend that enjoys destroying Hungarian national consciousness will never rule again”. He condemned claims that Hungarians cheered the arriving German Wehrmacht in March, 1944. There was “no support for Nazis and their Hungarian collaborators” throughout most of Hungary in 1944-45, he claimed.

In answer to a question from The Budapest Beacon about whether the institute is planning to deal with resistance actions against the Nazis, as well as the anti-Communist resistance after 1945, Szakály answered they “could be possible areas of research”. Veritas will further research the history of the 1956 Uprising, he added, and proposed a possible inquiry into alleged war crimes committed by the invading Soviet Army.  A previously existing institute devoted to the 1956 Uprisng was gradually reduced by the national government into a small oral history department within the National Library from 2010.

The institute’s scope of historical research could even be called groundbreaking at first glimpse: Veritas is the first official state historical research body to deal with Hungarian modern history between 1867 and 1994, involving an assessment of the first democratically elected government and its opposition.

The Budapest Beacon discussed the objectives of the government-funded institute with Szakály in July.