Victims of unlawful segregation in Hungary sue for damages 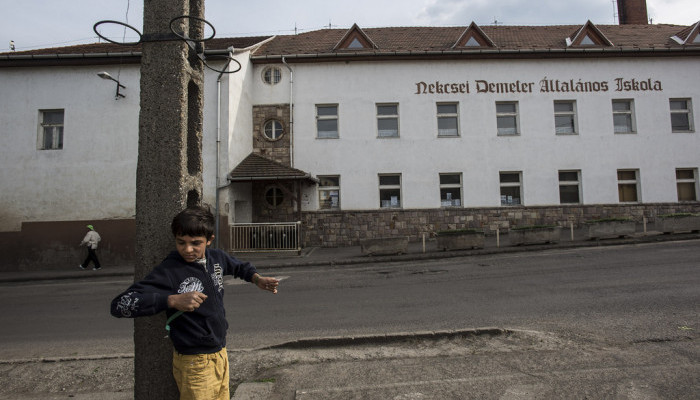 “Segregation does not lead anywhere, it only increases social exclusion, and I think every person living in Hungary has the same right to the best education possible regardless of religion, ethnicity, or any other personal attributes.  I think there is a point when people have to stand up and say that it is not possible to do this.” – Eleonóra Hernádi, lawyer

They surf the internet during chemistry class.  The eighth graders are learning from fourth-grade Hungarian textbooks.  There are 14-year-olds who can neither read nor write.  They are the children of the Gyöngyöspata Roma who have been unlawfully segregated at the local primary school and who have consequently filed a lawsuit.

This segregation has not only caused long-term spiritual damage but, owing to the enormous knowledge gap, many of them cannot complete secondary school, even though without a trade or a high school diploma their future is grim.

Dávid is a 19-year-old from Gyöngyöspata.  He attended the primary school from the first grade.  When he finished, he went to the technical high school because he would have liked to become a welder.  However, he had to leave technical high school because it was too demanding of him academically.  This was because he completed primary school lagging far behind many of his non-Roma peers. He mostly blames this on institutional segregation, which has worked for a long time at the Nekcsei Demeter Általános School.  Dávid attended a class made up entirely of Roma (gypsy) children.

“Our class was on the ground floor.  We were not allowed to go upstairs, even though there was the only washroom we could have used because ours didn’t work.  There wasn’t any water in it.  I wasn’t allowed to go upstairs to use the toilet or to visit my friends, because as soon as the teachers or the director saw me, they shouted at me to go back down,” says Dávid.

The non-Roma children avoided Dávid and his other classmates.  They even went to the lunchroom separately so as not to have to eat with the Roma children.

The situation with regard to the quality of education was not any better.  Dávid recalls being an eighth grader attending a combined class for sixth and seventh graders and being taught from a fourth-grade book.

Chemistry class meant that everybody went up to the computer room and everyone, including the teacher, used the internet.  The teacher held a total of three or four chemistry classes over the course of two years.  If the teacher conducted a proper lesson, then he immediately gave them a written quiz the next class.

Dávid is not the only one who did not manage to complete technical school.  Among his classmates almost everyone dropped out.  He thinks that if the quality of his education in primary school had not been so poor he could have finished secondary school and would not be a 19-year-old day laborer working alongside his father.

At the technical high school “the curriculum was simply too much for me,” says Dávid, adding that “it is not possible to make up eight years just like that.”

“At the start of school the teacher talked to us about welding, and used words and expressions I had never heard before.  I am behind in every subject. I write badly and with many mistakes,” he says.

“They destroyed our lives.  I cannot learn a trade.  Altogether there are six children in my family.  Five of us go to this school.  My younger brother cannot even start technical high school because he cannot write and can only read sporadically.”

Paying for the damage they caused

Hungary’s highest court, the Curia, said last March that the Gyöngyöspata primary school unlawfully segregated Roma and non-Roma children, resulting in the former receiving a lower quality education.  Despite the court instructing the school to end this practice, the expected reforms never happened.  The end of segregation meant in practice that the parents of the non-Roma children took them out of school and enrolled them in another.

Adél Kegye, the lawyer who sued the school, the local government, and the central state agency for managing schools, KLIK, on behalf of the Foundation for Disadvantaged Children (CFCF) experienced something similar.  “In vain did the court pronounce the segregation of gypsy children unlawful; nothing changed,” Kegye says.

She said that after such a court decision it should have been obvious children were entitled to some form of compensation.  As this did not happen, the children, their parents and the foundation filed a lawsuit with the help of volunteer lawyers.  They are asking HUF 500,000 (USD 1750) per segregated student for each academic year spent in a segregated class at any time during the previous five years.  Most of the plaintiffs are still attending primary school, although some have already moved on to secondary school.

The lawsuit is not about material damage, because it is impossible to prove with numbers how many children suffered what damages due to segregation.  “It cannot be quantified how much leaving school without knowing how to read or write is worth,” says Kegye.

There have already been similar cases before the Hungarian courts and the European Court of Human Rights in Strasbourg.  In nearly every case the judge awarded damages.  In the current case three different law offices helped the foundation and the children, as well as a number of Eötvös Loránd University law students.

They had dreams but now they have none

The writ contains a separate description prepared for each of the 63 affected children outlining their lives with supporting documentation.  Many of the interviews conducted with them were moving.  “Hearing what their dreams were and the kind of future they envisioned for themselves, and then learning that nothing came of them, is shocking,” says Kegye.

The damage caused to the children arises from two things: one is the segregation based on ethnicity.  The other is the result of the low quality of segregated education which failed to impart on them the basic competencies prescribed by the National Basic Curriculum.

For this reason their chances of realizing their potential were decreased, as were the chances of society recognizing them and their obtaining work that provides adequate income.

But at least as important is the spiritual damage caused by the separation, especially the development of inferiority complexes.  In a previous case, the uniform opinion of experts and psychiatrists offering testimony was that if a child is taught separately from the others, this causes serious and permanent damage.

In a 2004 segregation case the expert said:

“The damage to the children arising from their separation caused a minority complex in them that can never be cured and which will remain with them as adults, although the consequences will decrease with age.”

Hungarian Academy of Science Sociology Institute associate Gábor Havas, who has authored numerous studies on the separate education of Roma children, said in another lawsuit:

“Separated children develop inferiority complexes.  Children can never rid themselves of the feeling that they were separated from the others for a reason, but their reactions are different.  Some become withdrawn, others become aggressive or destructive.”

According to another expert opinion, while the education gap can be closed, psychological problems can persist in their private lives because segregated children often turn in onthemselves and become withdrawn, making it difficult to form relationships and make friends. Havas believes all of this can be traced back to the stigma.

They deprived them of opportunity

Depriving one of opportunity is an existing expression in Hungarian legal practice, and the foundation is citing this as a precedent in the lawsuit.  “The way the students were taught deprived them of the opportunity to study further, and with that the possibility of learning a trade or finding meaningful work.  Unable to complete technical high school, they are left with no other option than day labor and public work,” says Kegye.  They did not want to prove that the children could not continue their education because of the school, only that the teachers’ attitudes significantly decreased their chances.

Eleonóra Hernádi is one of the lawyers helping the foundation for free.  She says she has never had a case like this, and that many things motivated her to take it on.  “This was a completely unknown field, but I found the problem to be very interesting from a legal and human point of view.

“Segregation does not lead anywhere, it only increases social exclusion, and I think every person living in Hungary has the same right to the best education possible regardless of religion, ethnicity, or any other personal attributes.  I think there is a point when people have to stand up and say that it is not possible to do this.  For me this case is like that,” she said.

One hearing took place this month.  Since the Curia has already stated that the children received a lower quality education, the plaintiffs needn’t prove that the law was broken.  Nevertheless, the local government, KLIK and their joint lawyer are behaving as though the judgement was never handed down.  The local government’s lawyer said in the previous trial that she believes the technical literature offered by the plaintiff as evidence was biased, and that educational studies concluding the opposite also exist.  KLIK and the school’s lawyer argued that the court must examine individually how much damage segregated education caused each of the 63 children.

The judge has yet to decide whether the children should testify.  The lawyer and the foundation do not think this is a good idea.  “It is not certain that these children are prepared to testify before a court, or that they should be called on to explain what it was like to use a toilet that wasn’t working,” explained Hernádi.

Dávid is not too optimistic.  He does not think they will win the lawsuit because “the whole thing with be smoothed over”, but he attends the hearings anyway.  If he and his family can afford it, he would at least like to obtain a technical certificate in welding.