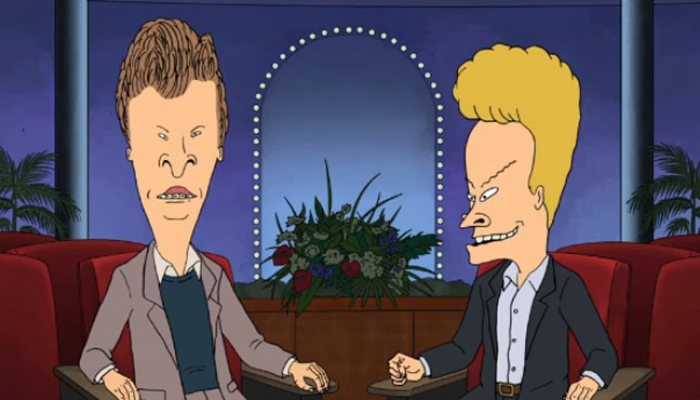 The following is an English transcript of the opening ten minutes of an hour-long “interview” with Prime Minister Viktor Orbán that was broadcasted on pro-government EchoTV Friday evening.  Returning to the airwaves after an absence of three years, the program “Mélymagyar” (Deep Hungarian) was hosted by Fidesz co-founder and publicist Zsolt Bayer, who, not surprisingly, found himself in complete agreement with nearly everything Orbán had to say– so much so that he frequently took the liberty of completing the Prime Minister’s sentences for him!

This was not difficult since the interview afforded the Prime Minister the opportunity to rehash much of the government propaganda of the past six months in the form of now familiar catchphrases.

We regret that we have neither the patience nor the inclination to translate the entire hour-long interview.  Suffice it to say that sitting through an hour of “Beavis and Butthead” (pictured above) would have been less painful and more enlightening. 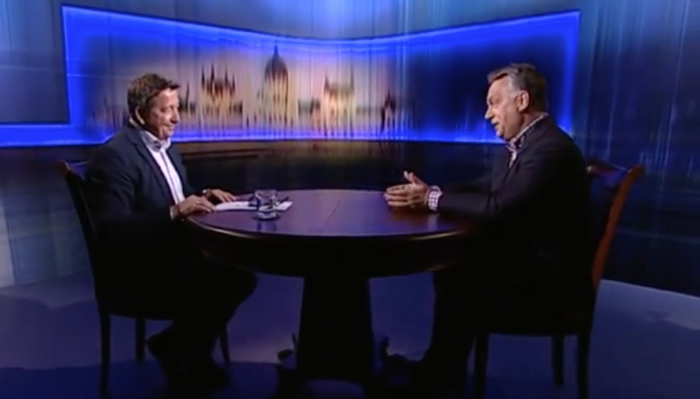 Zsolt Bayer (ZsB): Good evening.  After an absence of three years, “Mélymagyar” returns to Echo Television.  My first guest is Viktor Orbán, the Prime Minister of Hungary.  I respectfully welcome you.  Thank you for accepting our invitation.

Viktor Orbán (VO):  Thank you for the invitation.

ZsB:  Dear Mr. Prime Minister . . . The situation is the following.  Parliamentary president László Köver was here.  He gave a long interview to Magyar Hirlap in which he cautions right-wing intellectuals against panicking.  I totally agree with the president’s words.  However, as an old Fidesz Jedi knight, I sense a disturbance in the Force.  I am thinking about in 2014 when we once again won with a two-thirds (parliamentary majority).  I expected—and in this I am not alone—that the most boring four years in the world would follow, and that a boring, calm period of governance would follow since, to all intents and purposes, there are no more big changes to be made.  It did not turn out this way.  And this disturbance in the Force manifested itself in (Fidesz losing by-elections in) Veszprém and Tapolca.   How do you see the situation?

Between 2010 and 2014 we effectively made a revolution that opened the possibility of creating a new political, a new economic, a new cultural and universally a new structure.  And we were victorious.  In history there are few successful revolutions.  The question is what comes after a victorious revolution?

At such times there are two roads before a nation or community, as well as before Fidesz and the Christian Democrats: either counter-revolution or a new restructuring.  That was what was at stake in the 2014 general election.  It turned out there would not be a counter-revolution.  We won all three elections.   From this, a new structure follows that I would refer to as realizing a polgári Hungary (a politically conscious, middle-class establishment in Hungary-ed.).  That is our program and that is the task.  This is what we started working on.  This, by the way, is what is under way.

We have reached a moment of truth.  Even now, as we are sitting here, every minute families are being freed from the slavery of debt thanks to our program of settling score with the banks.   So we are in the middle of the most important step towards creating a politically aware middle class.  Because if someone lives in the debt of slavery, he cannot be a member of or believer in . . .

VO: We are liberating hundreds of thousands of families.  So now we are in the period of the creation of a politically conscious middle class.  That is at least as difficult as making a revolution.  There is no hope that this can take place without any conflict.  This is how we see it.

In actuality, people such as yourself think “how good it would be to lean back and say ‘we are past everything’”.  Now we have to learn that we are never finished.  There is always a task before us.  And where there is a task, there are those who want to be a part of that, those who are reluctant to be part of that, and those who are actively opposed to it.  And from this conflicts arise.  This is the nature of modern politics.

The important thing is that, after the second victory, the victors and the victors’ social camp, whose core we Fidesz and Christian Democrats provide, hold it together.

But if we define the situation like this, then the situation is good.  I agree with President László Köver, also a founding member of Fidesz, that the situation is good in that this is what we wanted.  For 25 years we wanted to realize a politically conscious middle-class Hungary.   Like in the Edda song whose lyrics we shouted in the 1980s, if I may quote here: “We dreamt a world for ourselves.”   Here we stand before the gate.  Now we have to step through it.  That is how things stand at the moment.

VO: (Laughing) If you write the book that is possible.  If the left wing writes the book, then there will be a paragraph on the subject of fascism!

ZsB: Then I’ll be the one to write it.  I think what has happened can be compared to that.  And I don’t want to contradict you . . .

VO:  I agree.  But let’s establish that it was necessary to save the country from economic collapse . . .

ZsB (nodding slavishly, unable to get a word in edgewise):  Precisely.  Of course.

VO: . . . from complete bankruptcy and from the slavery of indebtedness.  From a hopelessly non-competitive situation of dependency we had to built a structure that gives people work and bread.  It was necessary to make changes to the constitution.  In other words, fantastic things took place between 2010 and 2014.  And today if we have a chance to enter our own world, it is because all of Hungary successfully struggled.  And I repeat that the political strength for this was furnished by Fidesz and the Christian Democrats, because Hungary’s political strength for a long time has been Fidesz and KDNP.   There were other political actors within the country but the political strength of the country, both within and externally, is provided by our community.

ZsB: Yes, this is what I wanted to refer to when I said that in my opinion that the last time there was a task of such magnitude was when they revived Hungary after Trianon.   Society is an unthankful kind of thing.   After five years people understand that over the past four years a revolution actually did take place, but are now expecting that “dear government, please convert this into pocket change.”  Trickle it down to us. No?

VO:  Yes, and I, too, think that is the situation.  It’s just that the situation is that we need to talk about what is happening.  This is happening.  Every year we move a step forward, and this is true for everybody.   After all, we would be the government of tax decreases.  We are in the process of discussing the budget.  Once again, we are the government of decreasing taxes for families with children.   Over the next three years step by step we are going to increase the tax discount for families with two or more children by a factor of two.   So, that politically active middle-class establishment at whose center stands the middle-class citizen, and the concept of that—work, family, home, order, and national independence—in this regard every year we are moving one step forward.  Would it be possible to take two steps? Or three steps?  It is possible but we can only take one step at a time.  I should add that apart from us, nobody has succeeded in taking so much as one step forward.  While I accept people’s impatience—why can’t something be three times as much if we’re talking about wage increases, or twice as much if we are talking about decreasing expenditures?—I understand all of this.

The question is that in the spirit of commonsense and the program of creating a politically conscious middle-class establishment, we step up and say “people, you’re right, but we can only take one step at a time.”   After all, we have to maintain the country’s financial system and we cannot take irresponsible risks.  Irresponsibility is the privilege of the opposition.  We can only create the politically active middle-class structure in a manner that is economically and fiscally responsible!

The question is whether we have the voice for this.   Whether we still have the voice with which to speak to the people about this.  And in this regard we do not always perform well.  Occasionally we lose this.  There can be a number of reasons for this.  One reason is that we have been governing for five years, and we are too involved in government administration.  We cannot behave like a movement.  And even I am a  prime minister more often than a party chairman, even though these are two different things.  It is not enough to run a government.  It is also necessary to define a direction for our own political community.   It is necessary to say why we are fighting and why it is worth fighting.  One must work for this.  The two by-elections were about this.  Indeed, one has to go and explain this.

By itself governmental accomplishments do not bring political support.  We learned this between 1998 and 2002.  If we thought we were doing things well, and that the people will understand this, and that in this way we can retain their confidence, and that they will again bestow their trust on us and vote for us, then we are mistaken.  We have to complete an actual political community building work.  We didn’t do this work as well or as intensively this year as we should have as we did the previous four years.  We have an excuse for it.  People aren’t the only ones who get tired.  Just look at us!  We don’t look the same as we did five years ago either!  The work was tiring for us, too!

But that was the past. Now we have to look to the future.  And we have to do this work better than our rivals, who are doing the same thing.  They are looking for the weak points, the weak links in the chain, and trying to make us weak.  As the forces of counter-revolution, they are interested in this creation of a politically conscious middle-class establishment not succeeding.  This is a political struggle.  And we have to be at least as good, if not better, than our opponents.