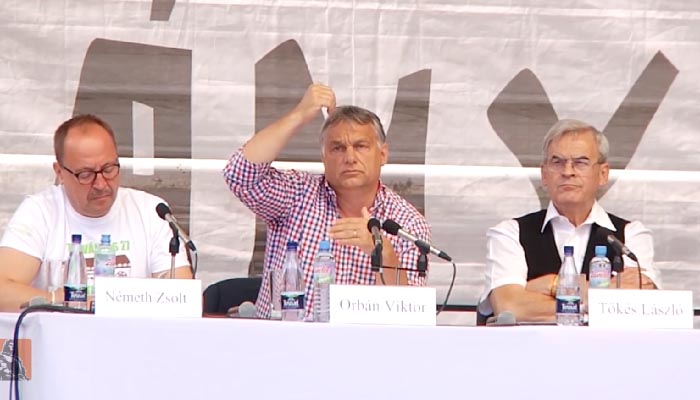 “I am not a member of Donald Trump’s campaign staff.  The thought never occurred to me that between the two he would be the best for Europe and Hungary.  I would never have thought this.  Nevertheless, the situation is the following:  I listened to the candidate, and I have to tell you he made three recommendations on how to stop terrorism, and as a European I could not have expressed any better what is needed for Europe.”  – Viktor Orbán, Prime Minister, Hungary

In a speech delivered at the “Tusványos Free University” summer camp in Băile Tușnad, Romania, on Saturday, Prime Minister Viktor Orbán effectively endorsed the candidacy of Donald Trump for President of the United States.  The Hungarian prime minister’s infamous illiberal democracy speech was delivered at this event in 2014.

He said Trump was right on three points, namely:

Orbán said that the United States is one of the biggest supporters of the migratory pressure on Hungary, for which he blames President Barack Obama and US refugee policy.

Sharing his opinion on “the situation in Europe” the prime minister said Hungary was being squeezed out of mainstream Europe, that the “black sheep of Europe” will rejoin the flock when it turns out the mainstream was wrong.

He observed that a number of crazy things are happening in the world right now and said they were connected.  “The people are full of fear and uncertainty” and Europe had no idea what it was up against, referring to its ineffectual handling of the migration crisis.

Orbán said there were similarities in the problems faced by the US and Western Europe, which he attributed to their failure to realize that their own dominance has waned as new players on the global economic scene have taken over.   He said this has caused younger generations in the West not to see the future as promising as their parents once did.   Orbán accused traditional political elites of having let youth down and warned that the financial crisis had turned into a crisis of elites, for which he offered the rise of Donald Trump in America and Alternative for Germany (AfD) in Germany as proof.

The prime minister said there existed a crisis of democracy, caused by the fact that “the masses want something other than what the elites are proposing”.

“The people live in a constant state of restlessness, nervousness and tension,” observed Orbán, adding that in the meantime “terror attacks, violence and a seemingly unstoppable wave of migration” are crashing down on Europe.  He warned that “uncertainty and fear are now the basic psychological state on the European continent”.

He said “the fear of uncertainty needs to be banished from our lives” and the European Union needed to put an end to three things:

The Hungarian prime minister believes the EU has made three bad decisions:

Orbán said illegal migration is the main reason Europeans are scared, and he cited a poll according to which 63 percent of EU citizens believe immigration will change a country’s culture.

Other pearls of wisdom:

During the questions and answers session of the discussion, Orbán was asked about the plight of Ukraine.

According to him, Europe did not keep its promises to Ukraine following the Euromaidan protests. As a result, Ukrainians cannot enjoy the quality of life they had under the Yanukovych regime.

Orbán said there are three constant factors that have always dominated Hungarian policy: the size of its population, its geopolitical position and the “spirit of nation”.

“Hungarians do not want to be servile”

If Hungary were to follow ideology-based policies, it would mean the end of the country and loss of its sovereignty.

That said, Hungary has elemental interests in what is happening in Ukraine and the situation of ethnic Hungarians living in Transcarpathia (southern Ukraine).

“We are helping everyone who lives there, not just Hungarians,” Orbán said.

The prime minister went on to say that Europe needs to give more money to Ukraine, as well as visa waivers to Ukrainian citizens.

On the subject of the refugee crisis, Orbán said the United States is one of the biggest supporters of the migratory pressure on Hungary. He blames this on the President Obama and US refugee policy.

Orbán told the attendees that he is not critical of the Americans, “but what they think is right is something that would kill us, and that is why their [refugee policy] cannot be supported.

“The truth is that I can even understand the Americans’ positive point of view on migration because that is how the United States came to be, but they have to be able to see that in this situation we are the indians.”

The audience erupted in laughter.

Orbán then said that he has known there is some kind of correlation between the fate of the Hungarian nation and the indians, but he never thought the correlation would be this stark.

In this respect, he said, the future leader of the United States is of great consequence to Europe and the migration crisis.

The need for a European military

Orbán then transitioned to Brexit and Europe’s need to create a European military.

“Continental Europe will need military with serious power in the future because it does not exist today. Until today, our defense was guaranteed by the Americans and the Brits. This cannot stay this way.”

Orbán opined that Europe needs to start thinking about growing its military industrial complex because this would be good for the national economies, and it would generate many positive technological developments.

He said a European military would take years to create and should operate without the British and Russians.

“Because a European military would need to protect the continent from the east and from the south,” Orbán said, signaling that this is something that could be used to deal with migratory pressure as well.

He then encouraged everyone to vote in the upcoming anti-EU quota referendum on October 2.