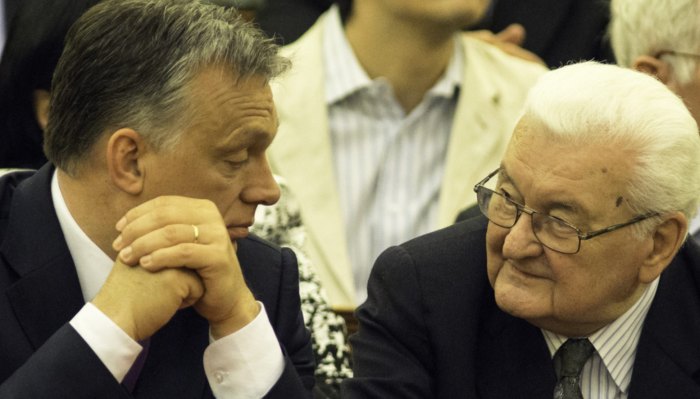 “Prime Minister Viktor Orbán has already expressed his own opinion at numerous forums in connection with this topic, and I kindly refer y0u to his earlier statements.” – Bertalan Havasi, Viktor Orbán’s spokesman

At the same time, Boross called for creation of a joint European Union armed forces to jointly impose order in the Middle East with America, and for the latter to finance the restoration of Middle East economies shattered by civil and religious war so that hundreds of thousands of migrants can be returned to their country of origin.

“Today nobody dares to say that immigration is not a problem of culture and civilization, but one of ethnicity.  At the same time millions of people speaking different languages and with a different skin color are arriving to Europe.  It is very important that it is not only their culture that is different, but their instincts, as well as their biological and genetic properties.”

(As the language throughout the interview is unusually strident for Boross, we suspect that the actual author of this “interview” is none other than Viktor Orbán himself (pictured left) who, on numerous occasions, has arranged for interviews echoing, and thereby lending credence to, his unconventional world view to appear in pro-government newspapers-ed.)

“Péter Boross talks as though we were living in 1944.  This was a racist, Nazi statement.  This kind of discrimination is unacceptable in a country that calls itself democratic.”

The opposition DK politician called on the government to suspend Boross’ government and state benefits.  According to RTL Klub, the former Prime Minister receives a government pension of HUF 1.5 million (USD 5,500) a month.

Christian Democratic politician Bence Rétvári who, serves as a member of parliament with the ruling coalition junion partner and as an undersecretary at the Ministry for Human Resources, said in response to Boross’ comments:

“It’s important that everybody honestly state their opinion with regard to this question.  Human dignity is a fundamental right and at the root of each and every human right.  Regardless of this, we mustn’t ignore the differences that exist in world view, attitude and culture because then we would only be deceiving ourselves.”

“Article 15 of the Fundamental Law says that people of all colors and races are equal.  Human dignity forms Article 2.   The United Nations’ declarations and practices attest to human equality, and the fact that human dignity pertains to everyone.”

Boross was Prime Minister in 1993 and 1994 after the death of József Antall.  He continued to serve in parliament as a member of the Hungarian Democratic Forum (MDF) until 1999 when he split with the party.

A vocal supporter of the second and third Orbán governments, Boross chairs the advisory board of the Veritas Institute for Historical Research, a government-funded body devoted to historial revisionism, led by controversial Hungarian military historian Sándor Szakály.

In December Boross told Hungarian state radio that, “generally speaking Hungarians were not anti-Semitic during the interwar period”, and “those who would like to present the era as the fertile ground of Hitlerism either are uninformed or intentionally want to misrepresent it”.

However, not all historians agree with his assessment of the interwar period.  Hungarian Spectrum publicist Êva Balogh, who taught central European history at Yale University for ten years, told the Beacon in December that Boross’ view of that period “ignores the facts”.   In her recent blog post on the subject of the interview, Balogh notes:

“This time the Hungarian media discovered that the former prime minister of Hungary is a racist. To my mind there is nothing surprising about this. It goes with the territory. Boross, who was born in 1928, would feel right at home in the Hungary of Gyula Gömbös and Pál Teleki, two prime ministers in the 1930s who were zealous “defenders of the race” (fajvédők).”

Not does Boross appear to be an advocate of the free press.  Asked by RTL Klub to comment on his interview, he reportedly told Hungary’s largest independent broadcaster that he was only willing to talk to state media.

(Evidently, Boross considers Magyar Hírlap to be an extension of state media, and to the extent the conservative daily relies entirely on government advertising, he may be right-ed.)

Propeller reports that it received the following response:

“Prime Minister Viktor Orbán has already expressed his own opinion at numerous forums in connection with this topic, and I kindly refer y0u to his earlier statements.”