Viktor Orbán: A legend in his own time 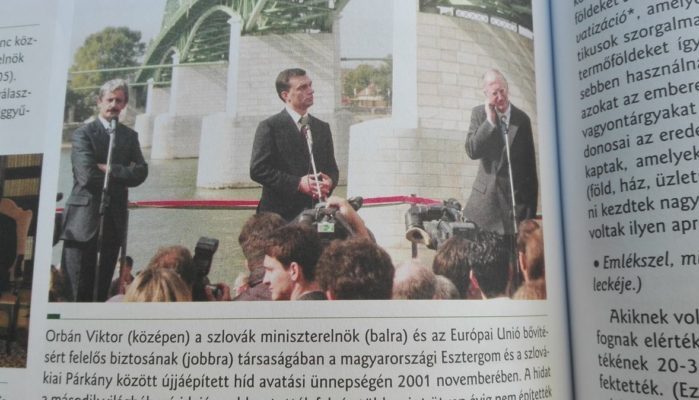 The newest edition of state-issued eighth-grade history textbooks features photographs of Viktor Orbán’s inauguration to his first term as prime minister (1998-2002), as well as a lengthy quote from his 2015 speech in Strasbourg in which he declares that immigration threatens Hungary, a culturally homogeneous nation that he doesn’t want to change. Orbán makes another appearance in a photograph of him posed next to Pope John Paul II, and another quote from him during Imre Nagy’s reburial in 1989.

The textbook also gives a basic introduction to the defining characteristics of different political ideologies. For example, the eighth-grade students learn that “The political right-wing’s most important feature is conservatism, whereas the left-wing’s is radicalism.

“Nowadays the left usually professes itself as liberal or socialist, but social sensitivity can be a feature of the right-wing as well,” the book continues. “What is certain is that the conservative politicians take into account the most important aspects of national ideals, past achievements, and accumulated values (family, religion, and national identity.) The radical political groups tend to disparage the values of the past.”

When asked by Index.hu whether these descriptions of political ideologies are balanced, József Kaposi, the director of the books’ publisher, Educational Research and Development Institute (Oktatáskutató és Fejlesztő Intézet), said: “It could be polished a little, but these concepts of left and right aren’t really applicable today, these are 19th century concepts. And anyway, let’s not forget that these texts are for 14-year old kids.”

The textbook deals with modern history since 1945, and this is why Kaposi has no problem with Orbán being a subject of historical study, even if the textbook seeks to enshrine recent statements on immigration into posterity.

Hungary created a state monopoly on the distribution of elementary and secondary school textbooks in 2011.  The following year it nationalized the textbook industry.  The fact that teachers may only choose between two textbooks in any subject from a list of approved textbooks is one of the many objections raised by teachers to sweeping educational reforms introduced under the second and third Orbán governments.

Interestingly, the new textbooks make no mention of the refusal on the part of teachers’ unions to participate in the government’s education roundtable, or the Tanítanék (I would teach) movement that has already resulted in work stoppages.