Viktor Orbán rehashes his “I have a dream” speech 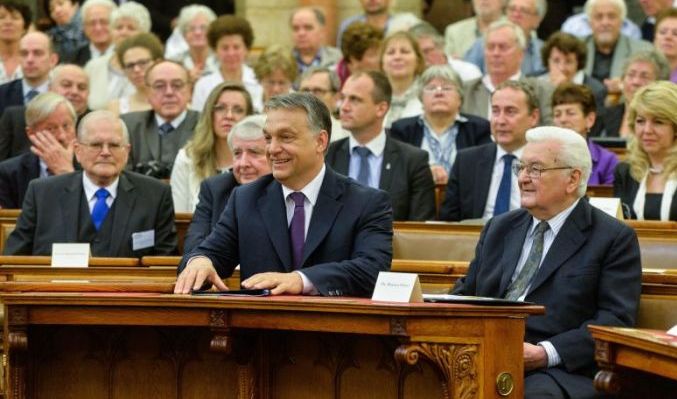 Repeating almost verbatim much of what he told Fidesz publicist Zsolt Bayer over the course of an hour-long nationally televised interview on EchoTV last Friday, Prime Minister Viktor Orbán announced today that his party was on the threshold of realizing its 25-year-old dream of creating a politically conscious middle-class in Hungary.  Fortunately, this time his audience was spared references to Jedi knights and 1980s Hungarian rock bands.

The occasion of his speech was a conference organized by the Veritas Historical Research Institute headed by revisionist historian Sándor Szakály.  The conference was held on the 25th anniversary of the formation of Hungary’s first freely elected parliament.

Joined by former Hungarian Democratic Forum politician Péter Boross, who succeeded József Antall as prime minister upon the former’s death in 1993, Orbán said the next three years of his administration would be devoted to realizing the dream of creating a polgári Magyarország, that is, a politically conscious middle-class Hungary (consisting of Fidesz-KDNP supporters.-ed.)

He said that doing so would be no less of a challenge than bringing about the system change of 1989 or the “constitutional revolution” of 2010, although he said it would be of a different nature.

The Prime Minister said his party had the mandate and the strength to realize the program for which it had struggled for the past quarter of a century.

Orbán claimed that after “twenty years of struggle, a victorious constitutional revolution” took place in 2010, followed by “five years of determined struggle to clear away the rubble and build the necessary foundation.”

The Fidesz chairman said the breakthrough took place in the autumn of 2006 when Ferenc Gyurcsány acknowledged in his infamous “Öszödi speech” that his governing Socialist party had “lied morning, noon and night” to win re-election that year.  Orbán said the “economic crisis and crisis of trust” that ensued created the need to form a parliament in 2010 similar to the one of 1990.

He said that in 2010 “after two decades of delay” the Hungarian people made yet another revolution which empowered the Fidesz-KDNP supermajority to “do everything that the homeland demanded.”

“Who would have thought in 1994 that our political community would have created a two-thirds parliamentary majority, and successfully completed a delayed revolution?” asked the Prime Minister.

He emphasized that in 2014 the Hungarian people ended the debate of the previous two decades by returning the government to power with another two-thirds parliamentary majority.

Orbán said the past five years proved that by joining together “we became capable of doing things that seemed hopeless” including “restarting” the economy, freeing families and local governments from “the slavery of debt'”, taxing international companies and banks, and “sending home” the IMF.  All while adopting “Europe’s most modern fundamental law” which he claims made possible the far-reaching “economic structural reforms” taken under the second and third Orbán governments.

“We protect the families, we give work instead of aid, we stand up for Hungarian interests in Brussels, and we got back our national sovereignty,” boasted the Prime Minister.

Orbán reportedly concluded his speech by remarking that “We fought battles, it was entertaining, manly work.  We thank the women for their help.”