Viktor Orbán says Europe is under attack by unarmed migrants 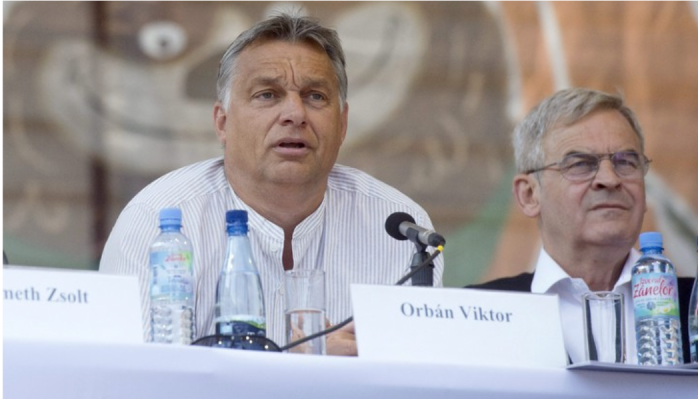 “One cannot see the political future with sharp eyesight, or with a pair of powerful binoculars because the future ‘is not ready’. We must decipher the future from that which we already know, and in the great competition of understanding the past, those will win who arrive at the right conclusions more swiftly and more courageously.” – Viktor Orbán, Baile Tusnad, July 25th, 2015

One year after announcing that his government was building Hungary into an “illiberal democracy”, on Saturday Hungarian Prime Minister Viktor Orbán returned to the Romanian resort town of Baile Tusnad to address university students on the final day of the 26th annual Bálványos Summer Open University and Student Camp.

Fresh from a recent vacation on the picturesque Croatian island of Brac, Orbán criticized Brussels for its inability to defend its borders from unarmed migrants, and faulted the European Left for failing to see the danger they pose.   Never one to miss an opportunity to sing his own praises, Orbán touted his government’s success at introducing reforms and restarting the Hungarian economy.

Orbán announced that there was no historical precedent for Europe receiving so many refugees from outside its borders, which he attributes to political developments.  He said refugees fleeing war zones in the Middle East pose less of a danger than the masses arriving from the African continent.  He believes that human rights is a kind of “western fundamentalism”, and autocracy is inducing record numbers to undertake the risk of crossing borders.

Speaking for the duration of his speech in the first-person plural, Orbán emphasized that “we would like for Europe to remain for the Europeans, and we want to protect Hungary for the Hungarians.”

“There are those who think completely differently about this: the European Left does not see a danger in immigration but an opportunity,” said the Prime Minister, adding that the reason the Left likes the “escalation of immigration” is because “it weakens and eliminates the national bonds”, which he claims to be the long-term goal of the Left.  “Those who instigated against Hungarians living abroad in 2006 and would now receive migrants with open arms simply do not like Hungarians only because they are Hungarians,” claimed Orbán, referring to the 2006 defeat of a referendum initiated by Fidesz while in opposition that would have given Hungarians abroad the right to vote in Hungarian elections.

(There are perfectly legitimate reasons why a majority of Hungarians rejected giving Hungarians living abroad the right to vote, and which have nothing whatsoever to do with being anti-Hungarian-ed.)

According to Orbán, Hungary wants no part of “multiculturalism”.  Furthermore, he claims there is a “clear connection” between immigration and the spread of terrorism, as well as the growth in unemployment.  Hungary’s prime minister also pointed out that the arrival of a large number of illegal immigrants is usually accompanied by a dramatic increase in crime.

According to Orbán, in “the war against illegal migration”, Hungary is “caught in the pincer” of having to struggle with migrants arriving from the south and the east even as those who have traveled further west are sent back.  “The truth is that this is more than we can bear,” Orbán confided to the audience of university students.

The prime minister called the European Union’s past a “success story” but warned that it has lost its pragmatism and flexibility, with “obsessive ideology” supplanting real solutions.  Orbán believes Brussels is obsessed with “hammering together” the EU member states, with the results that the sovereignty of nation states is decreased.  He said Hungary is doing something that is sensible and successful, but which strengthens the sovereignty of the nation-state, causing it to be rejected and condemned in the eyes of the European mainstream.

At this point Orbán launched into his usual discussion of Hungarian successes.   On the subject of the Greek crisis, Orbán boasted that Hungary had repaid the International Monetary Fund on time and had never asked for an extension from creditors.  He also cited the phasing out of foreign currency-denominated loans and the nationalization of previously privitised companies as examples of his government’s successes.

The first country which needed a rescue package after 2008 was not Greece but Hungary. Yet, after 2010, Hungary succeeded in reaching a point where its debts had not increased but decreased, and achieved this against the background of the fact that it never sought any kind of preferential treatment or respite for the repayment of its debt.

(While Hungary’s national debt has decreased to around 77 percent of GDP thanks to GDP growth of 3.6 percent in 2014, in nominal terms it is now at its highest point ever-ed.)

At the end of his speech, Orbán announced that the overwhelming majority of Hungarians returning the so-called National Consultation on Immigration and Terrorism supported the government’s anti-immigration policies.

More than two thirds of Hungarian people find the issue of the spread of terrorism relevant to their own lives. Three-quarters of them believe that illegal migrants are a threat to the jobs and livelihood of the Hungarian people. Four-fifths take the view that the policy of Brussels regarding immigration and terrorism has failed, and we therefore need a new approach and more stringent regulations. The same percentage of people encourage the Government to adopt more stringent regulations in contrast to Brussels’ more lenient policy, it transpired from the answers given to the questions.

That only one in five Hungarian households bothered to return the questionnaire seems not to have given Hungary’s headstrong prime minister pause for reflection.