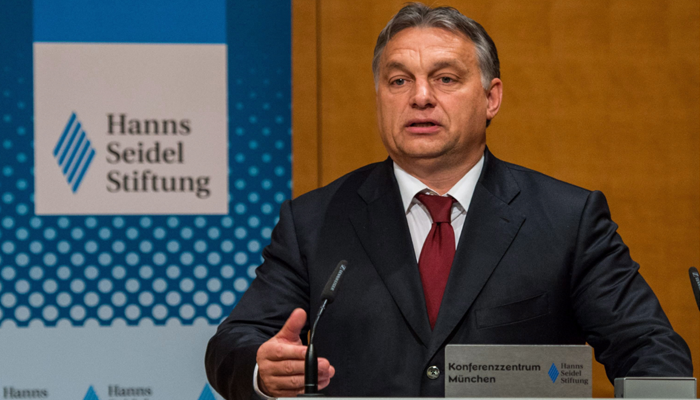 At a speech delivered yesterday in Munich at the headquarters of the Hanns Seidel Foundation, Hungarian Prime Minister Viktor Orban said the United States was pressuring Hungary over plans to build the South Stream pipeline and expand the Paks nuclear power plant, and called for Hungary and other Central European countries to be compensated for losses arising from sanctions on Russia.

On the subject of Hungary’s relations with the United States and Russia, Orbán said the pipeline and the expansion of the nuclear power plant were economic questions that had been caught up in “geopolitics, military policies and security policies” in light of the Ukraine-Russian conflict.

He said Washington interprets both South Stream and Paks to mean that Hungary is moving closer to Russia, where in fact “we don’t want to move closer to anyone, nor do we want to distance ourselves from anybody”.  Hungary wanted to follow policies that were not “pro-Russian” but “pro-Hungarian”.

Orbán said the South Stream pipeline was the “sister” to the North Stream pipeline which supplies Russian gas to Germany in a manner that bypasses Ukraine.  He said South Stream served Hungarian interests because the situation in Ukraine posed a risk to secure gas supply, and that even if the source was the same, at least the supply route was diversified.

With regard to the expansion of the Paks nuclear plant, Orbán said cheap energy was of key importance to strengthening Hungary’s competitiveness, and the country could not move huge amounts of capital in support of renewable energy as in the case of Germany, and it did not have its own sources of energy.

He said his country’s “only means” of reducing dependency on foreign energy sources was the expansion of the state-owned nuclear plant, which uses Russian technology.  It was understandable that expanding such a facility should involve Russian cooperation.

Orbán said the United States thinks Europe should be moving away from Russia rather than cooperating with it, and this is why the US has raised “extraordinary objections” to the Paks matter, adding somewhat cynically that the US would “have been pleased to have built” the new reactors.

On the subject of the crisis in Ukraine, Orbán stated that it was not possible to accept violations of international law, and for this reason decisive measures on the part of the West were “completely justified”.  However, he pointed out that the economic sanctions harm Hungary and if a more reasonable solution cannot be found, then Central Europe and Germany will suffer serious economic damage in the years to come as a result.  He emphasized the importance of working out some kind of compensation for those countries that are loyal to the policy of sanctions but are suffering from its consequences.

Orbán said Central European countries were interested in a diplomatic solution and “meaningful negotiations” needed to take place as soon as possible.  Neither Central Europe nor Germany could be “unloyal” to their military allies, and for this reason “we have to exert a palliative effect within the community”.   That being said, for the time being “there are no other ideas” in the EU or NATO apart from sanctions.

Orbán emphasized that Hungary is interested in a “democratic Ukraine capable of sustaining itself in the region between Hungary and Russia”, because Hungary “was already a neighbor of the Soviet Union once and does not want that situation to repeat itself”.

He pointed out that in order to be self-sustaining Ukraine will need some EUR 25 billion worth of supports annually.  Orbán expressed his concern that EU development funds earmarked for Central Europe will be depleted in the interest of supporting Ukraine.