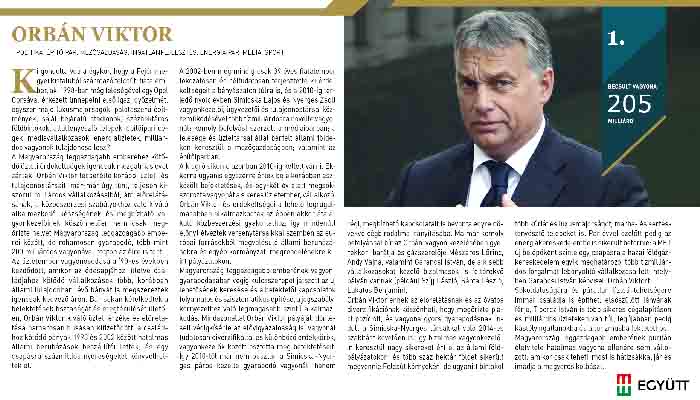 Együtt (Together) president Viktor Szigetvári announced on Saturday that his party is launching a campaign to inform Hungarians about Prime Minister Viktor Orbán’s wealth. According to Szigetvári, Orbán is worth an estimated HUF 205 billion (USD 750 million), which is managed by straw men of the likes of Lőrinc Mészáros.

“Viktor Orbán’s declaration of assets is clear and meets the legal obligations — it is complete and truthful. Anyone claiming otherwise is lying,” Havasi wrote.

According to Index.hu, if Szigetvári’s estimate is true, the Prime Minister would be the second-richest person in Hungary after Sándor Csányi.

“I have never had, will never have and do not have any ‘straw men’,” responded the prime minister.

Opposition party Együtt has since released a one-page Forbes-like exposé of Orbán, outlining his sensational rags-to-riches story. In the piece, the author explains the prime minister has used his influence to determine the winners of lucrative public procurements and adopt legislation that put cronies in an advantageous position on the Hungarian market.

The exposé lists names and explains the meteoric rise of Orbán’s still-unaccounted-for wealth.