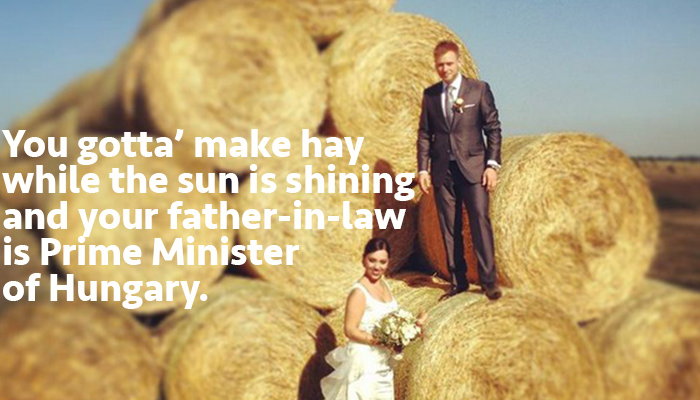 István Tiborcz, Prime Minister Viktor Orbán’s son-in-law, has reportedly sold his shares in Elios Innovativ Energetikai Zrt. to a newly registered company owned by a construction company that won some forty public tenders in 2013 and 2014.

Elios Zrt. reportedly won HUF 6 billion (USD 22 million) worth of public tenders in 2014 and 2015, most of them based on tender documents prepared by a company owned by Tiborcz’s former business partner, Bálint Erdei.  Nol.hu reports that the company’s profits in 2014 were HUF 490 million and that it paid HUF 470 million (USD 1.7 million) in dividends to the company’s owners, István Tiborcz and Bálint Erdei.  The news portal also reports that in 2014 government orders amounted to HUF 2.9 billion (USD 10.5 million) of HUF 3.5 billion (USD 12.7 million) in total revenues.

The buyer, WHB Befektetési Kft., is owned by West Hungária Bau Kft., a construction company owned by three individuals including Attila Paár, one of Hungary’s wealthiest businessmen. Over the past several years West Hungária has won a number of public tenders in the western city of Győr, including the renovation of the so-called Danube Gate square and the modernization of the energetics at Győr’s István  Széchenyi College.

In Budapest it served as the general contractor on the CET (alias “Bálna” or “Whale”) retailing and entertainment center in Budapest, which finally opened last year after several years of drawn-out litigation with the City. More recently, the company undertook the enormously expensive reconstruction of the Várkert Bazárt (Castle garden bazaar).

As former US ambassador to Hungary Eleni Tsakopoulos Kounalakis makes clear in her book about her time in Hungary, decisions about which companies won which EU-funded public contracts were made by Prime Minister Viktor Orbán himself in consultation with the former Minister for National Development.

The Prime Minister’s son-in-law reportedly sold his interest in Nyugati-medence Kikötőfejlesztő Kft., the company that purchased the marina on Lake Balaton in the resort town of Keszthely, at the end of last year for a mere fraction of what it cost Hungarian taxpayers.

Elios Zrt. is presently the subject of an official investigation in relation to it winning a series of lucrative public lighting tenders.

Tiborcz is reported to have acquired HCS Experts Kft. a company which provides expert advice on matters pertaining to information technology.  VS.hu reports that in 2014 the company posted after-tax profits of HUF 50 million (USD 180,000) after total revenues of HUF 553 million (USD 2 million).

Fortunately for Tiborcz, the Main Directorate for Public Procurement and Supply (KEF) recently issued a series of public tenders covering a period of four years. The government plans to spend some HUF 36 billion (USD 130 million) on “high level consultation and services relating to upgrading and supporting software” of which HUF 12 billion, HUF 6 billion and HUF 18 billion is to be spent on services pertaining to Microsoft, Novell software and Oracle software, respectively.

Only companies supplying at least HUF 300 million worth of software-related advisory services in 2014 need apply.  Companies like HCS Experts Kft.