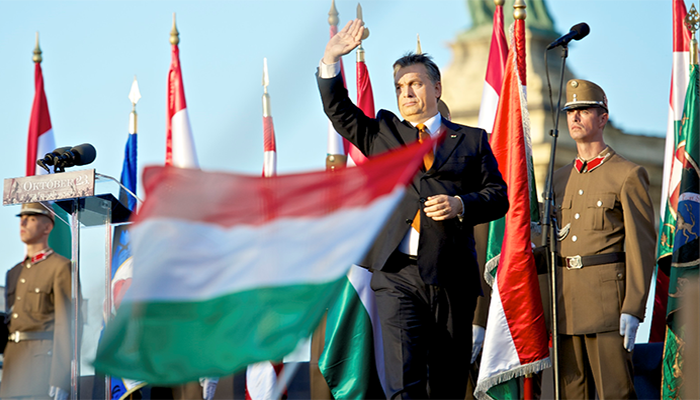 On Wednesday, 23 October 2013, the day Hungarians commemorate the revolution of 1956, Prime Minister Viktor Orban delivered a 26-minute long speech that was beautiful in the homage paid to the heroes of 1956 and yet terrible in its implications for Hungary and Europe.

There are matters than cannot be tolerated any more in the life of a nation.  In 1956 Hungary had no reason to wait any longer.  If the Soviet world continued then nothing would remain of Hungarian life that was ours.  Something had to be done.  We took up arms and began a freedom fight against an immeasurably greater power, the powerful and terrifying Soviet Union.  The Hungarians of that time did what was required of them by the nation.  Honor to the heroes.”

“We have these heroes to thank for the fact that, in the darkest period of Hungary’s history under the Soviet occupation, they preserved our resolve, that we could raise our heads because it was something to be proud of, even if in secrecy.  The heroes won, even if they died, because in place of the oppressive darkness of dictatorship they left a legacy of resistance, bravery, and glory”.

“We Hungarians have thrice shaken off the yoke of communism in the 20th century: in 1919, in 1956 and in 1990.  It was not the free world that defeated communism but the peoples of Europe yearning for independence and freedom who took their own fate back into their hands.”

“It was in this square that we delivered the final blow to Communism.  It was here that we unified the righteousness of the victims of the freedom fight of 1956 with our life power and our resolution.  We reburied the bodies of our heroes that had been wrapped in tar paper and put in the ground, and with that we drove the final nail into Communism’s coffin whose first nail was hammered in by the heroes of 1956.  There was no power that could stop us.  It was here we said that Soviet soldiers must leave Hungary.”

“We Hungarians believe the book of fate is written by our belief, our courage, our love, and the strength of our standing united, and if it comes to that, our blood, and that we must write it for ourselves.  Hungarian heroes don’t worry about their fate, but take action.”

“It is a nice thing for all of us to come here to pay homage to the heroes of 1956.  All of you know, as do I, that we did not come here today just to remember and pay our respects.  All of us came here to know what is going to happen, and what we must do to bring about what we want.”

“First of all, we must see clearly, and openly and self confidently say what we see and know.  We know Hungarian freedom did not only have heroes but that there were traitors too.  We know all of our revolutions were put down from abroad.  We also know that there were always those who helped the foreign enemy.”

“On 23 October 2006 they hunted us in the streets of Budapest with rifles and charged us on horseback and beat the peaceful protesters with the blades of their swords.  This happened because the power of government was in the hands of those who would use the power of state arms against their own people without restraint.  Have no doubt that they would again be shooting at us, with rubber bullets (at best) and would turn the state organs of force on us.  They would do it today if they could. But they cannot because the Hungarian majority got rid of them in 2010.”

“We also know well that the former communists delivered Hungary and the Hungarian people into the hands of speculators and the international money industry.  We also know that there were and there still are those standing at the ready to once again hand Hungary over to the colonizers.   We also remember well that in 1989 we stood here enthusiastically believing it was enough for freedom if the Soviets leave and we hold elections.”

“We didn’t know then that the totality of the rights of freedom are not the same as freedom.  We didn’t know then that the people of the past were organizing and preparing to take over just as in 1956 when it seemed the revolution had succeeded and we would be free they had already organized the recall of the Soviets and the invasion.   Even at the time of the system change they were quietly organizing with foreign powers to steal the country’s wealth and resources”.

“The meaning of freedom is not merely that there are no Soviets here and Hungary is not the victim of the Warsaw Pact, but rather in the words of Attila Jozsef ‘we can liberate and have liberated our own lives’.  We organize, we decide about things independently without others interfering, and we take responsibility for our actions.”

“We did not ask anyone’s permission or approval for the government’s decisions of the past few years which, in fact, we took in opposition to half the world.  This is how it came to pass that Hungary has its own constitution based in Hungarian and European Christian culture.  This is how we became a reunited, world people that collectively decides about it future.”

“We decided Hungarians will no longer live as captives to international financial funds, and that the banks and national companies must share in the common burden. We decided that in place of aid we will build our lives on work, that we will release our families from intolerable burdens, that we will initiate a national economic policy, that we will re-industrialize our country, and keep Hungarian ground in Hungarian hands.  We decided to rejuvenate our nation’s capital so that we can once again be proud of it and the world can once again admire it.”

“What we want is that this not be once again taken away from the Hungarians.  The crowd has assembled on the square of heroes to show that they will not allow their pensions, their wages, their child support, to be taken away, or for their families and cities to once again fall into debt or become the servants of speculators and bureaucrats.”

“The current government majority and its supporters are not sticking their heads in the sand because we see that once again they are organizing, threatening, falsifying and allying with foreigners.”

“We want to live in peace.  But peace is not the same as inaction.  There cannot be peace without justice.  The ‘peace march’ did well to rebuff foreign attempts to colonize the country.”

“The cabinet will reveal all the lies, falsifications and new tricks in the hundreds. The struggle will be difficult because freedom comes at a high price for us.  We know well it’s not enough to govern well.  It’s not enough to free the debtors from their binds.  The long list of results are not enough.  Reassuring polls are not enough either.  Elsewhere it would be enough.  But we’re Hungarians. We know our own kind well.  We would like to finally see a government all of us are satisfied with!”

“Don’t believe that the government can win the battle without you and in your place. You must not leave the work simply to the government or the party.  If we want to protect the constitution, workplaces, pensions, wages, and lower household utility costs, that is, our everyday freedom, everyone must personally participate.  Organize, volunteer, sign up!”

“We have no reason to be in a rush.  But slowly and surely we must start up our machine and line up our troops just as we did in 2010.  Get ready so that we can finish now what we started in 1956.  We need everybody.”

“As in 1956 there is no middle way.  Either we free ourselves or we will not be free.  He who does not chose freedom of his own strength, slavery will be his fate.”

Your speech of yesterday and, not independent of this, the state celebration held in the Heroes square shocked the public opinion of many democrats.

I point out not only as the head of a democratic party but also a former prime minister of the Republic of Hungary that our country’s one official day of  pride should not be mixed up with a political rally on the occasion of a state celebration organized with public monies.

The supporters of the governing party are not one and the same as the Hungarian people.  Orban-istan is not one and the same as Hungary.  Fidesz is not the state party, at least not for the time being, even though you do everything in your power to make it so.  You may be the eternal leader of Fidesz but even then the eternal leader of your party cannot be Hungary’s eternal prime minister.

The fact that you held today’s speech in front of a wall of soldiers gave rise to shocked disgust and even fear.  In this do not refer to the traditions of old and do not refer to the habits of other peoples: this was more than distasteful in Hungary especially during the celebration of 1956.  Hungary is not run by a military junta.  You on the other hand are not a leading general: obtaining and keeping democratic power requires the support of the majority, not weapons and soldiers.

However, your speech was the cause for the greatest outrage, Mr. Prime Minister.

You excluded from the Hungarian people the growing numbers of those who are dissatisfied with your politics.  You used your political rally financed with public money to banish your political opponents from democratic society and from the legacy of 1956.

Mr. Prime Minister, this was not a political mistake.  Among democrats this was a crime!

We believe those countrymen of ours to be democrats who vote for parties and politics other than those we do.  The Hungarian Republic, whose name you would even have us forget, was built on the spiritual legacy of 1956.  Every democratic party competing to represent the voters is part of that legacy.

You have no right and no basis for branding your political opponents as the descendants of murderers.  And it is totally shameful to assert about any democratic political power that they would shoot into crowds if given the opportunity to do so.

For the chairman of a democratic party to deliver such a hate-mongering speech is unacceptable.  For someone to do so as prime minister representing the people is perhaps free Hungary’s greatest scandal.

You should be ashamed of yourself, Mr. Prime Minister.  If any semblance of the old democratic is left in you go after the people and ask the forgiveness of the opposition voters who are the lawful members of the Hungarian people just like your followers!