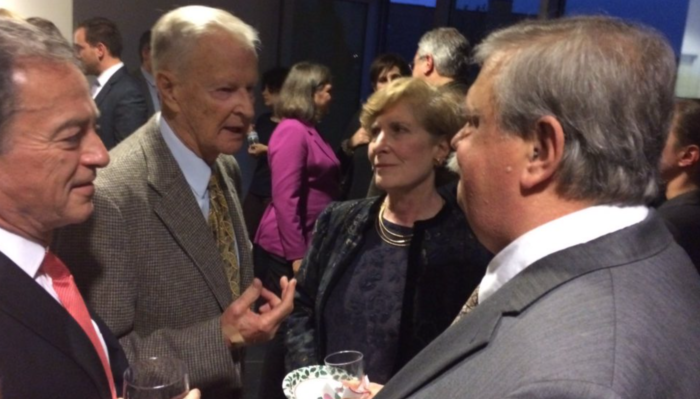 The Hungarian government’s one-sided and distorted celebration of 1956 has hijacked the meaning and essence of the uprising. Prime Minister Viktor Orbán’s populist, proudly illiberal and anti-Western government has trampled the meaning of 1956 underfoot. So much so, in fact, that scores of US officials boycotted commemorative events organized by the Hungarian embassy in Washington.

But on the evening of October 27th, in a penthouse suite overlooking the US Capitol, a group of people came together to commemorate the true meaning of 1956.

Those entering the penthouse from the elevator were greeted by former Hungarian ambassador to NATO and the United States András Simonyi, who, with a smile and rolled-up sleeves, diligently sliced salami at the kitchen counter.

Tom Melia opened the event by praising the efforts of those who fought for the freedom of Hungary in 1956. But the praise is not limited to Hungary, Melia said. Non-Hungarians, such as Povl Bang-Jensen, worked tirelessly and at great personal cost, with special consideration for the safety of Hungarian sources, to document the events of 1956.

Charles Gati compared the Hungarian government’s falsification of 1956 to the famous photograph of Vladimir Lenin and Leon Trotsky (on display at the Stalin Museum in Gorky, Georgia) subsequently altered to remove Trotsky whom Stalin considered “an enemy of the people.”

This legacy of falsifying history, Gati said, lives on today in Hungary.

According to Gati, the Orbán government has hijacked 1956 by claiming that he and his supporters are the sole legitimate representatives of the goals and values of the uprising.

By refusing to acknowledge the true heroes and ideals of 1956, Gati said, the Hungarian government is denying honor to those who paid the ultimate price for rising up, such as Pál Maléter, Zoltán Tildy and Imre Nagy.

The 1956 revolution was profoundly democratic in its demands for freedom of the press, checks and balances, and deeply pro-European yearnings, Gati said.

“Those of you who follow events in today’s Hungary know that freedom of the press, checks and balances, and other essential features of democracy have either ceased to exist or are in really short supply,” he continued.

Gáti took a moment to point out Anita Kömüves, a writer with Népszabadság who was in attendance. The guests, well aware of the plight of Népszabadság, turned toward Kömüves and erupted in applause.

He then pointed at a few faces in the audience and said that when the “[Orbán government] comes after you, wear that as a badge of honor.”

The real features of 1956 are not mentioned by the current Hungarian government because Orban’s policies toward liberal democracy and Europe differ from those that Hungarians wanted in 1956, Gati explained.

Referring to statements made by Speaker of the National Assembly László Kövér (Fidesz) on Monday, he condemned the notion that the United States should be blamed for the crushing of the uprising and not Moscow.

“Anyone who blames Washington and not Moscow should have his head examined,” Gáti said.

He also denounced statements by former prime minister Péter Boross at a 1956 commemoration concerning “heinous deeds of US imperialism.”

Simonyi thanked everyone for taking the time to commemorate the true meaning of the 1956 uprising. He also told attendees that Hungary is indeed going through a difficult period.

There are Hungarians who are still committed to seeing a brighter future for the country, Simonyi said, and this state of uncertainty and strife will also pass.