“We must stop Brussels!  We can send a clear and unequivocal message to Brussels with the referendum.  We must achieve that it withdraws the dangerous proposal.  For this we must vote no.” – Page 14.

The government of Hungary has sent 4.1 million, full-color, B4-sized booklets to Hungarians at home and abroad making the government’s case for why Hungarians should vote “no” in the national referendum on October 2.

Hungarian Prime Minister Viktor Orbán has staked his political prestige (and that of his national conservative government) on the outcome of the referendum.  In order for it to be valid, one half of the electorate plus one must cast a valid vote on the question:

Do you want for the European Union to be able to mandate the obligatory settlement of non-Hungarian citizens in Hungary without the approval of the National Assembly?

The national conservative government of Orbán is leaving no stone unturned in its quest to inform the Hungarian voting public of the dangers posed by illegal immigration so that the overwhelming majority of them will vote “no”.

Legal experts and opposition leaders alike argue that the referendum question is moot and the referendum itself is illegal, as Hungary’s “obligation” in this matter arises from international treaties and not from acts of parliament.  But this has not prevented Orbán from wallpapering the country with xenophobic billboards and bombarding the viewing and listening public with anti-Brussels advertisements at horrific cost to taxpayers.

For the benefit of our readers who reside in Hungary but do not read Hungarian, below is our translation of the 18-page booklet, including front and rear cover. 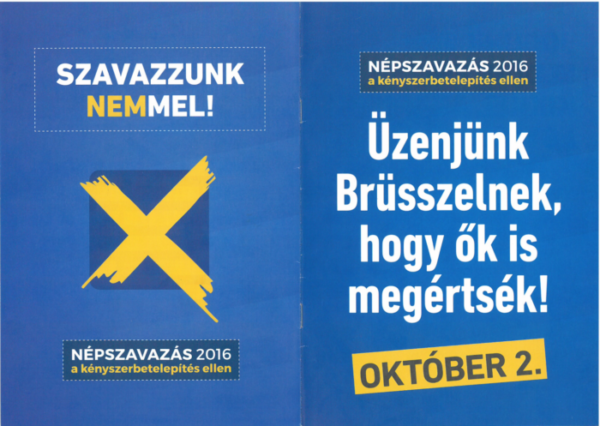 Front cover (right): Referendum 2016 against the forced settlement. Let’s send Brussels a message they can understand too! October 2nd 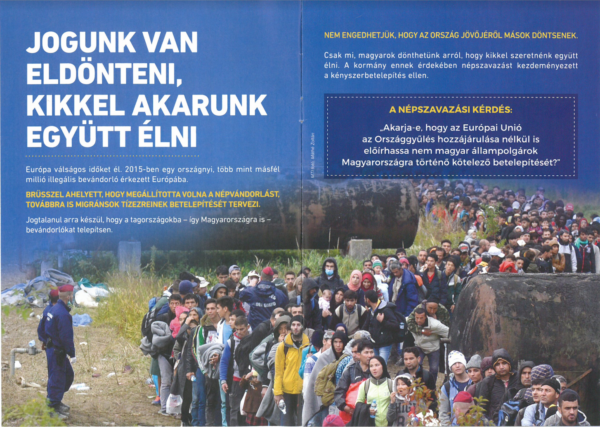 Page 1 (left): We have a right to decide who we want to live with

Europa is living in times of crisis. In 2015, a country’s worth, more that 1.5 million illegal immigrants arrived in Europe.

Brussels, instead of stopping the people’s migration, plans the further settlement of tens of thousands of migrants.

It is unlawfully preparing for the member countries, including Hungary, to settle immigrants.

We cannot allow our country’s future to be decided by others.

Only we Hungarians can decide with whom we would like to live.  To this end, the government has initiated a referendum against forced settlement.

Do you want for the European Union to be able to prescribe the obligatory settlement of non-Hungarian citizens in Hungary without the approval of the National Assembly? 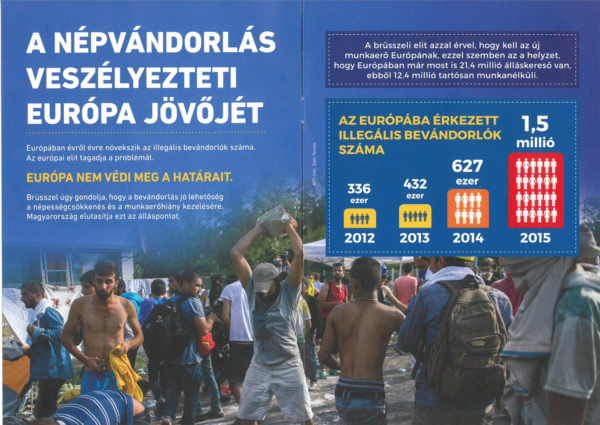 Page 3 (left):  The migration of people is jeopardizing Europe’s future.
Year by year, the number of illegal immigrants is growing in Europe. The European elite deny the problem.

Europe does not protect its borders.

Brussels thinks that immigration is a good way to deal with population decline and labor shortages. Hungary rejects this approach.

Page 4 (right):  The Brussels elite argues that new labor is needed in Europe. However, the situation is that there are already 21.4 million unemployed seeking work in Europe, and of those 12.4 million are long-term unemployed. 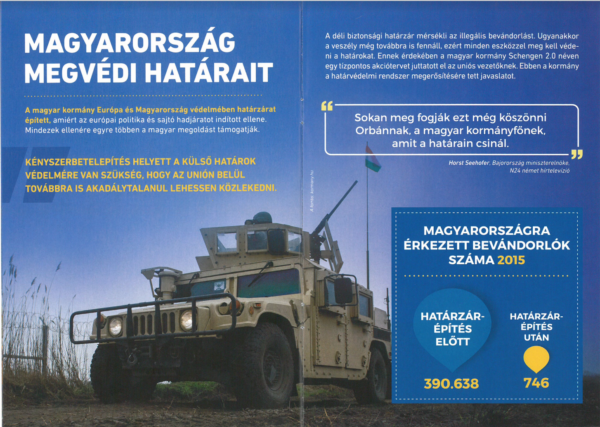 The Hungarian government built a border fence for the protection of Europe and Hungary, for which the European politic and press launched a campaign against it.  In spite of this, more and more have come to support the Hungarian solution.

Instead of forced settlement, protection of the outer borders is needed, so that you can still travel unimpeded within the Union.

Page 6 (right): The southern safety border fence ameliorates illegal immigration.  Nevertheless, the danger still remains, which is why we must protect the borders by any means. To this end, the Hungarian government has brought a 10-point plan of action to EU leaders called Schengen 2.0. In it, the government makes proposals for the strengthening of the border protection system. 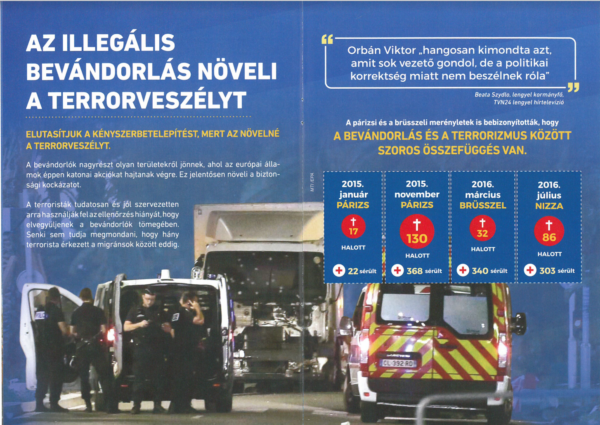 We reject forced settlement, because it would increase the danger of terror.

The immigrants largely come from places where European states are engaged in military campaigns. This significantly increases safety risks.

Terrorists consciously and in a well-organized manner take advantage of the lack of control, so that they can slip in with the crowds of immigrants. No one can say how many terrorists have arrived so far among the immigrants.

The Paris and Brussels attacks proved that there is a very close relationship between immigration and terrorism. 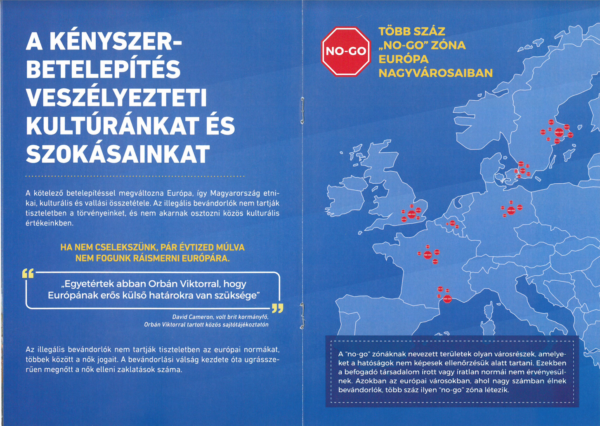 Page 9 (left): Forced settlement endangers our culture and our customs.

Obligatory resettlement would change Europe and Hungary’s ethnic, cultural and religious composition. Illegal immigrants don’t respect our laws, and they don’t want to share in our common cultural values.

If we don’t take action, in a couple of decades we won’t recognize Europe.

Illegal immigrants do not respect European norms, among others the rights of women. Since the immigrant crisis began the number of assaults on women has grown by leaps and bounds.

The so-called “no-go” zones are areas of cities that the authorities are unable to keep under their control. Here the recipient society’s written or unwritten norms do not apply. In those European cities, where immigrants live in great numbers, several hundred “no-go” zones exist. 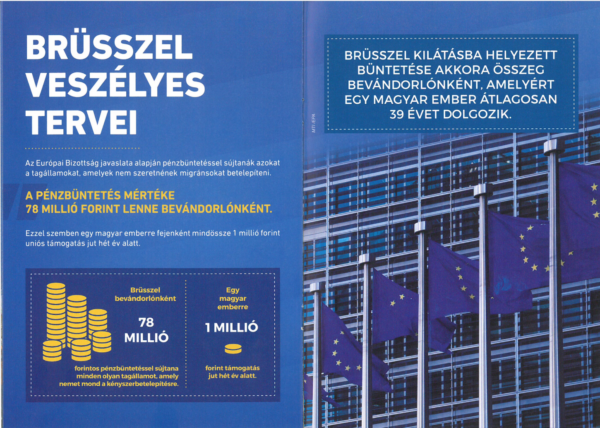 Based on the European Commission proposal, those member countries that would not like to resettle migrants will be fined.

The size of the fine would be 78 million forint per immigrant.

By contrast, one Hungarian receives 1 million forints of assistance over a period of seven years.

Exhibit:  Brussels would impose a fine of HUF 78 million per immigrant on those member states that say no to the forced settlement.

One Hungarian gets HUF 1 million in under seven years.

Page 12 (right):  Brussels has proposed a fine of such a sum, that a Hungarian person on average must work 39 years to earn. 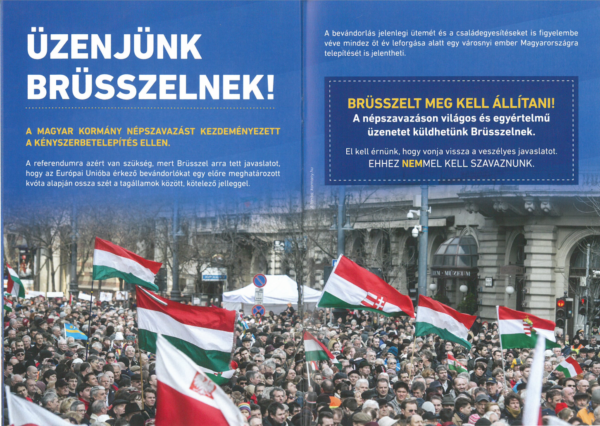 The Hungarian government has initiated a referendum against forced resettlement.

The referendum is necessary because Brussels has proposed that immigrants arriving in the European Union should be distributed based on a predefined quota among member states of a compulsory nature.

Page 14 (right): Taking into account the current rate of immigration and family reunification, within a period of five years a city’s worth of people could be settled in Hungary.

Brussels must be stopped!

We can send a clear and unequivocal message to Brussels with the referendum.

We must achieve that it withdraws its dangerous proposal.

For this we must vote no. 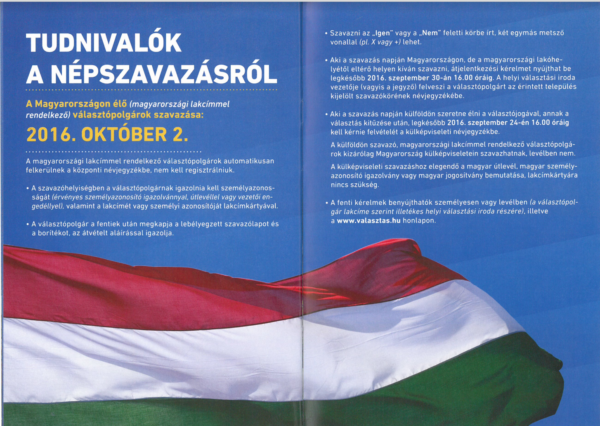 Pages 15 and 16 contain information about the referendum itself, including the hours polls open and close, what documents voters need to present in order to vote, and how to vote abroad. 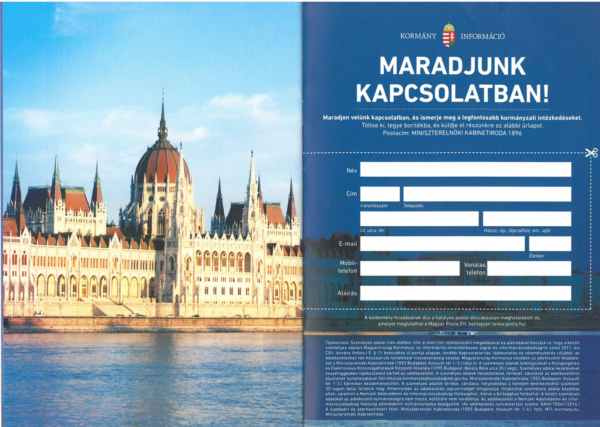 Page 17 features a photograph of the Hungarian National Assembly.

Stay in touch with us and be informed of the most important governmental measures.  Fill in the attached form, put it in an envelope, and send it to us.  Address:  The Cabinet Office of the Office of the Prime Minister 1896.

The form is followed by a lengthy disclaimer giving the government the right to use the information to contact the sender.