What really happened at Röszke?

“UNHCR was present at Röszke with the necessary experience, equipment and personnel to mediate, including a number of Arabic speakers.  Unfortunately, the Hungarian authorities declined our offer. This was a missed opportunity.” – Ernő Simon, UNHCR spokesman

NOTE: This article was updated on September 23rd to reflect the eyewitness account of photojournalist Martin Fejer published that day by Hungarian investigative journalism website atlatszo.hu.

The “Battle of Röszke” pitted hundreds of Hungarian police in full battle gear against asylum seekers, and resulted in scores of people being injured, a number of them seriously.  Based on eyewitness accounts and photographic and video evidence reviewed to date, including this video footage published by internet based news portal N1 the day after the incident, the Budapest Beacon has pieced together the following chronology of events.

It appears Hungarian riot police and commandoes from its counter-terrorism center (TEK) launched two separate attacks on asylum seekers between 4 pm and 5 pm.  As best we can tell, only the first police action was possibly warranted on the grounds that asylum seekers “cast the first stone”, and even then both UNHCR spokesman Ernő Simon and photojournalist Martin Fejer say the Hungarian authorities did little, if anything, to de-escalate the situation.

Hungarian authorities and state media have been very selective about the materials they release purporting to document what happened in Röszke on Wednesday, September 16th, 2015.

The footage was offered up by various government spokespersons as proof that so-called “illegal migrants” had attacked Hungarian security forces, and that they constituted a dangerous threat to the country.

Since then, numerous eyewitnesses, including members of the international press, have issued accounts at substantial odds with the official Hungarian version of events.  Their testimony, photographs and videos tell a very different story.

A video published earlier this week by daily online news portal Index.hu shows a phalanx of riot police stationed immediately behind the border crossing gate responding to two rocks and a water bottle thrown at them by spraying a crowd of several hundred mostly peaceful asylum seekers with pepper spray. 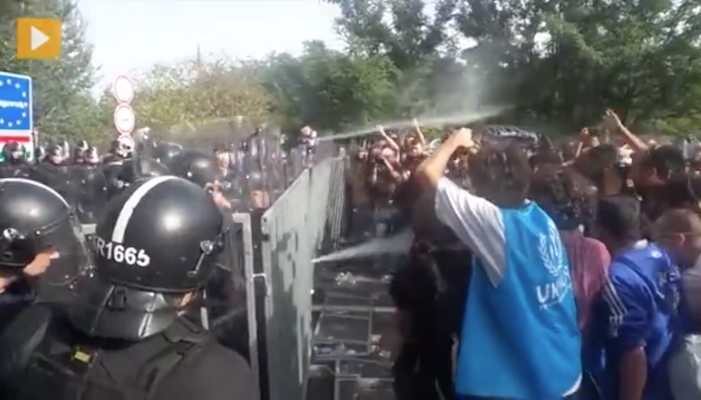 The crowd violently recoils.  In the resulting crush, a number of refugees are wounded, some seriously.  Scores of refugees can be seen fleeing the scene covering their eyes.

The police then blast those remaining within 20 or 30 meters of the gate with a water cannon.

At this point a number of young Middle-Eastern-looking males, clearly outraged over what has happened, begin throwing rocks, sticks, bricks, pieces of concrete–just about anything they can get their hands on–at the riot police, who respond by firing canisters of tear gas.  Some riot police are seen passing around the gate into the no man’s land to confront the rioters. As the tear gas wafts in the direction of the police, they withdraw to a safe distance 20 or 30 meters from the gate.

However, even the Index.hu footage only tells part of the story.

Did an open crossing gate send the wrong message?

Photojournalist Martin Fejer told investigative journalism newsite atlatszo.hu that riot police subsequently withdrew some 100-150 m from the gate.  As the border crossing gate was no longer guarded, angry young men started climbing over it to retrieve projectiles, and eventually force it open.  Inexplicably, a level-crossing gate on the Hungarian side of the main gate (seen at the top of this page) is left open, suggesting that the way is now clear for asylum seekers to enter Hungary.

Gradually, refugees and journalists cautiously enter the narrow corridor formed by chainlink fences on either side and a wall of police at the far end.  At this point a pair of men speaking Arabic carry what appears to be a wounded girl, probably hurt in the crush, up to the police, depositing her on the ground and gesturing that they will return with the rest of their family.

Meanwhile, in the mistaken belief that the Hungarian authorities had given up and were admitting them, a crowd of asylum seekers chanting “thank you, Hungary!” begin to cross into the narrow corridor fenced off on either side.  According to eyewitness accounts, police make no effort to dissuade them from advancing.

Among the refugees entering the “kill zone” were families with young children, even babies.

Members of the crowd can be seen smiling, clapping, talking reassuringly with their children, and even taking selfies when all hell breaks loose. 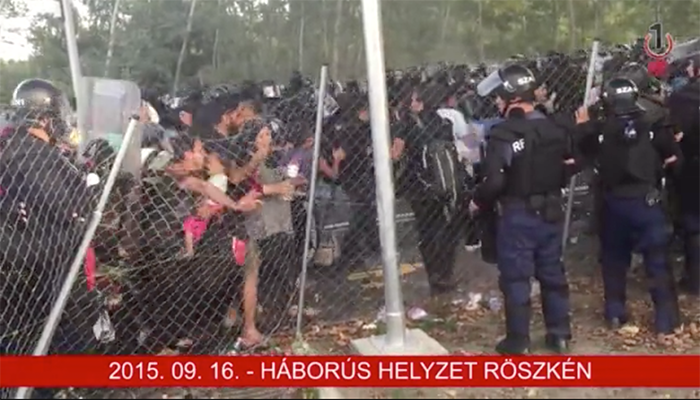 As the group of refugees reach the police cordon, instead of opening up and allowing them to pass, suddenly and without warning, the riot police and counter-terrorism commandoes begin violently pushing them back across the border.  Judging from the cries of women and children, a number of asylum seekers were wounded in the ensuing crush.

The N1 video footage shows riot police using their bodies to fortify the chain-link fence as screaming refugees, including families with children, are pushed up against the fence by fleeing refugees and their pursuers.

Eyewitness accounts confirm that counter-terrorism commandoes, who had taken up position behind the riot police, charged the crowd, indiscriminately beating and arresting anyone on the Hungarian side of the border they could get their hands in.  This is described in detail by Australian photographer Warren Richardson.

Not known at this time is the precise number of refugees, police and journalists injured over the course of these tragic events. Nor is it known whether anyone died (Warren Richardson reports seeing at least one refugee going into cardiac arrest and being denied the opportunity to administer CPR).

What seems clear, however, is that the “battle” was extremely one-sided, pitting riot police and counter-terrorism commandoes in full battle gear against unarmed asylum seekers.

According to an article published by Hungarian investigative journalism website atlatszo.hu, a former police commando has accused the Hungarian police of not only mishandling the situation, but deliberately escalating events.

UNHCR spokesman Ernő Simon told the Budapest Beacon that prior to the outbreak of violence, UNHCR’s regional representative, Monserrat Feixa Vihé repeatedly offered to mediate between the Hungarian police and the refugees, but that the offer was rejected by the Hungarian authorities.

“UNHCR was present at Röszke with the necessary experience, equipment and personnel to mediate, including a number of Arabic speakers.  Unfortunately, the Hungarian authorities declined our offer.  This was a missed opportunity” Simon told the Budapest Beacon by telephone.

At a press conference held Friday afternoon, former Hungarian Prime Minister Ferenc Gyurcsány  accused current Prime Minister Viktor Orbán of deliberately provoking a violent confrontation with the so-called “illegal migrants”.  Based on the evidence reviewed to date, the Budapest Beacon believes the former prime minister’s accusations are not without merit.