Will Hungary hold a referendum on hosting the 2024 Olympic Games? 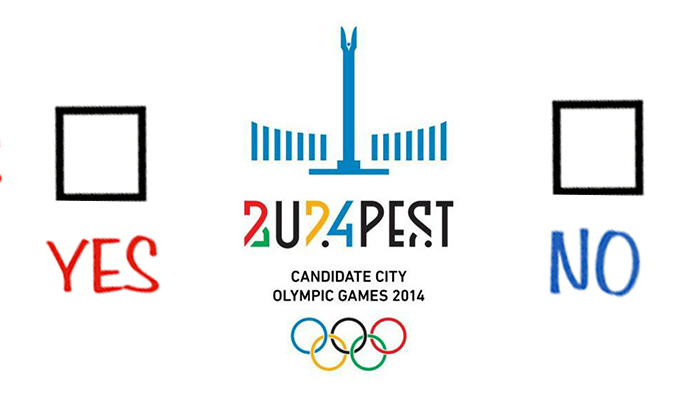 In less than a month Hungary will hold a national referendum over whether to allow 1,300 asylum seekers to temporarily settle in Hungary, even though legal experts point out that its outcome will have no bearing on Hungary’s obligation to respect the decisions of the Council of Europe.  And yet the government of Viktor Orbán steadfastly opposes asking the Hungarian people whether Hungary should spend some USD 1,100 per capita hosting the Olympic Games in 2024.

Daily online 444.hu reports that investigative journalist Katalin Erdélyi has submitted a referendum question to the National Election Committee for validation. Unlike the question submitted by Dialogue for Hungary (PM) earlier this year, which was rejected out of hand for no good reason, Erdélyi’s question does not ask whether Budapest should host the games, but rather whether “the National Assembly should invalidate the 2016 LVIII. law to bid for and host the XXXIII. Summer Olympic and XVI. Summer Paralympic Games.”

In the past the National Election Committee as proven reluctant to validate questions submitted by opposition politicians, even as it rushed to validate the government’s referendum question on the “obligatory settlement of illegal immigrants” in Hungary despite legal experts pointing out that (1) the question makes no sense, and (2) by law obligations arising from international agreements cannot be the subject of referendums.

Hungarian lawmakers and Budapest politicians were quick to endorse the capital city’s bid to host the 2024 Olympic Games. The Budapest city council approved the bid without actually having access to the full feasibility study commissioned by the Hungarian Olympic Committee.

Earlier this year parliament, passed law LVIII to bid for and host the XXXIII. Summer Olympic and XVI. Summer Paralympic Games.  Katalin Erdélyi proposes putting invalidating this law to a vote in the form of a national referendum.

Budapest mayor István Tarlós has called attempts to let the Hungarian people decide for themselves whether they Budapest should host the games “political demagoguery.”

Minister Overseeing the Office of the Prime Minister János Lázár has said that Hungary does not need to organize a referendum on the issue because Fidesz has all the authority it needs to make decisions for the country.

Speaking recently in Rio, Prime Minister Viktor Orbán claimed that all of Hungary supports the government’s plans to host the games in Budapest in 2024, even though a recent survey by polling firm Publicus found that a majority of Hungarians actually oppose Budapest hosting the Olympic Games.

Preparing Budapest’s bid to host the games has already cost Hungarian taxpayers more than HUF 7 billion, with some estimates putting the final cost of Hungary’s bid to host the 2024 games at some HUF 20 billion.