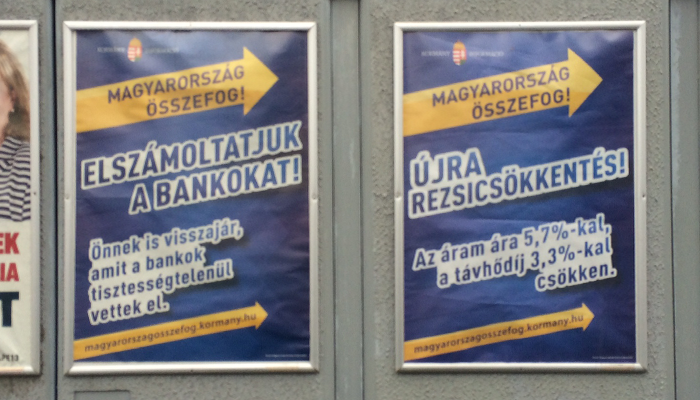 Transparency International Hungary, Atlatszo.hu, K-Monitor and Political Capital have submitted their assessments of how much money was spent by Hungary’s political parties for the 2014 municipal elections. Their findings show that the ruling Fidesz party was aided significantly by a government billboard campaign costing hundreds of millions.

They identified a number of election law abuses and improprieties, ranging from campaign finance irregularities to election fraud.

Ligeti says the financial disclosures submitted by the political parties are vague and inconsistent because the methodology for preparing such reports is unregulated and there is no formal review process of the documentation submitted. Furthermore, inconsistencies and irregularities in the political parties’ financial disclosure have no consequences.

This results in a great deal of obfuscation, according to Ligeti. Due to the nature of how party financing works in Hungary, there is no way to assess whether parties are spending as much on campaign finance as their legal income. However, due to the public nature of political campaigns, many of the campaign expenses can be assessed independently. Ligeti also points out that in Hungary there are no rules explicitly regulating campaign finance in the case of municipal elections.

How much did the parties spend on local and county elections?

The project’s findings indicate Hungary’s municipal elections had much in common with parliamentary elections. For example, the ruling Fidesz-KDNP coalition was able to rely on government propaganda to assist its candidates. The timing of pro-government propaganda played an instrumental role in this theme. Billboards reading “Hungary unites!”, “We will hold the banks accountable!” and “More money for local governments” blanketed the country, as did a marketing campaign proclaiming the government’s newest round of government-imposed utility price cuts.

To give an idea of the dominance enjoyed by Fidesz-KDNP, the country was blanketed with more than 7,700 campaign billboards, whereas the left-wing parties had a combined total of around 700, Jobbik 824 and LMP 47.

Investigative journalism NGO Atlatszo.hu uncovered cases in Hungary’s disenfranchised rural communities showing practices of vote buying. According to Atlatszo.hu editor-in-chief Tamas Bodoky, “One of the lessons of this year’s local government elections was that the leaders of the smaller municipalities used [the offer] of public employment to influence local voters.”

Hungary’s public employment works scheme primarily targets the country’s poorest and most remote communities, and the Roma community is significantly over-represented as the participant group in the public employment scheme, according to Bodoky.

Cases came to light in which mayors attempted to influence local voters by promising to provide opportunities for public employment or threatening to ban voters from having the opportunity to participate in public employment. Atlatszo.hu documented practices in the municipality of Forro in Borsod-Abauj-Zemplen county – one of the poorest regions in Europe – in which voters had to vote openly.

“Although we received information on specific vote-buying incidents from several places in the country’s eastern region, only witnesses of the events in Nyirmada were willing to tell their stories in front of our cameras,” said Bodoky.

Atlatszo.hu’s investigation was greatly assisted by an in-depth analysis prepared by Political Capital mapping out the nature of election abuses. “In order to statistically validate the correlation between public employment and election abuses, we first selected small municipalities – generally with just a single polling station – where the proportion of the population taking part in public employment is the highest,” said Laszlo Robert of Political Capital. According to him, the proportion of public-works employees in the 43 municipalities – mostly in eastern Hungary – is more than one-quarter of the working aged population, ages 15-64.

How did the researchers determine this?

Every day, a team of nine researchers gathered and organized information about campaigning during the municipal elections in Budapest, Pecs, Szeged, Debrecen and Miskolc – cities with a combined total of eligible voters of just under 2.1 million, or roughly one-fourth of the Hungarian electorate.

As Ligeti pointed out, it is difficult to determine how much Hungary’s political parties spend on campaigns because of the lackluster regulatory environment governing such financing. To overcome this obstacle, the project contracted with several organizations to monitor regional and county-level media and commercial advertisements.  Volunteers attended party conferences and events around the country.  A separate polling company measured how in touch parties were with local voters.  Another company kept track of political advertisements on public display (such as billboards). Between the disclosures provided by the political parties and the market value of the aforementioned services as determined by partner organizations, the project was able to make a comprehensive calculation how much money was being spent during the campaign.