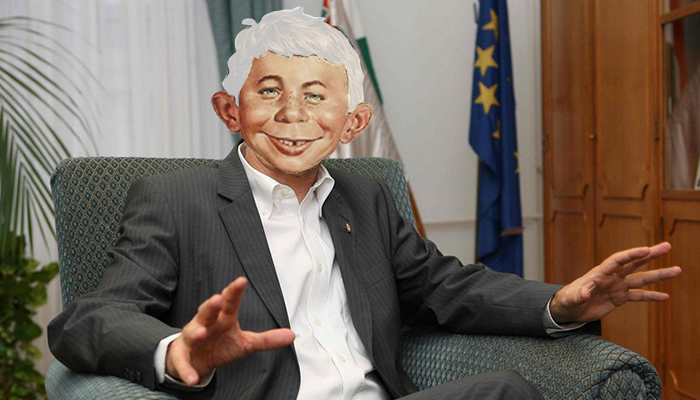 Hungarian Minister for Human Resources, Zoltán Balog, a theologian by training, presumed to lecture some 150-200 members of Germany’s political and economic elite on cultural and immigration policy at the 12th annual Bayreuth forum in Germany last week.

Zoltán Balog worked as a protestant minister and an educator before joining the 2nd Orbán government in 2010 as undersecretary for the advancement of minorities.  In 2012 he was rewarded for faithful service to Viktor Orbán (especially during and after the Gyöngyöspata scandal) to head the new Ministry for Human Resources, which combined former ministries and secretariats for education, health, social welfare, and cultural affairs under one roof.

(There is nothing about Balog’s educational or professional background that would qualify him to run anything larger than a parish school. However, he does speak German which, evidently qualifies him to speak at the Bayreuth forum.-ed.)

The minister was reportedly invited by German MP Hartmut Koschyk, who is also the federal commissioner for emigration and national minorities.

The theme of this year’s forum was identity, diversity in European cultural self-image and self-awareness.

The subject of Balog’s speech was the “importance of strengthening cultural awareness to the effective integration of immigrants”.

Balog told MTI that he stressed that a strong national identity and a European identity are not antithetical to one another, but rather strengthen one another.

(It is not clear who Balog has in mind, Viktor Orbán’s particular brand of Hungarian nationalism having done little to strengthen Hungarians’ sense of belonging to Europe-ed.).

On the subject of immigration, Balogh reportedly emphasized that Europe’s weakening cultural identify rendered it vulnerable, and that it put itself at risk by adopting foreign cultures, religions and ways of life solely on the basis of tolerance.

He said that if they truly want to be capable of integrating immigrants, then they needed to strengthen their own cultural, religious and historical identities in public education, science, and culture, adding that “a weak identity is not able to integrate other identities”.

On the subject of Europe’s falling birthrates and aging population, Balog said that immigration was not a solution, but that Europe should integrate its Roma population.   “There is a work force and a cultural potential within Europe, but it is still not integrated” said Balog.

(It is not clear how Europe’s 10-12 million Roma, the vast majority of which live in Hungary, Romania, and Bulgaria, could solve Germany’s demographic problems, unless, of course, Balog is proposing to deport them to work camps in Germany!).