Zsolt Németh: This is starting to sound dangerously like Putin’s rhetoric 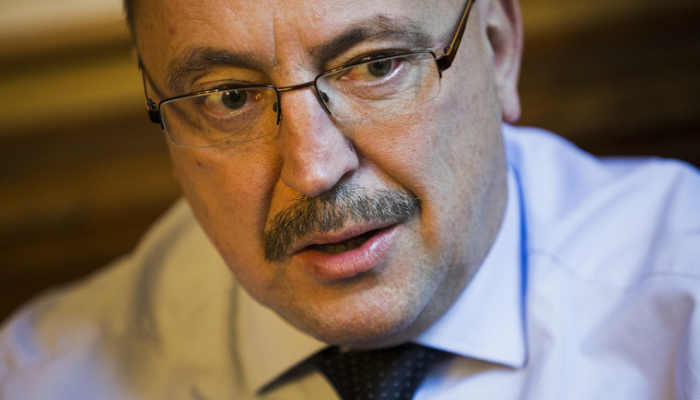 “This is starting to sound dangerously like Putin’s rhetoric” is the title of an interview appearing in daily online index.hu with Fidesz MP Zsolt Németh, who is chairman of the Parliamentary Committee on Foreign Affairs.

Like recent interviews with Chancellor János Lázár, Speaker of parliament László Kövér and Minister of Foreign Affairs and Trade  Péter Szíjjárto in pro-government newspapers Magyar Nemzet and Magyar Hírlap, this one has a crafted feel about it–at no point does the interviewer challenge assumptions underlying Németh’s answers. Like Monday’s interview with Szíjjártó, Németh partly blames Hungary’s growing international isolation on the reorganization of the Foreign Ministry over the past few months.  The purpose of this viewpoint seems to be to deflect blame from the Office of the Prime Minister which, in fact, has taken over many of the former functions of the ministry (resulting in it being largely relegated to a kind of glorified Hungarian investment promotion office-ed).

While acknowledging that Kövér’s comments were inappropriate, Németh maintains that the United States is largely to blame for the current diplomatic rift, accusing the US of using the same kind of Putin-like rhetoric as his Fidesz superiors.  Like Kövér, Németh sees the travel ban within a broader, geopolitical context primarily as a political tool rather than an expression on the part of the United States of genuine concern over corruption.

(The title of the article is ambiguously worded so as to make it unclear whether he is referring to Hungary or the United States.  Index.hu, one of Hungary’s most important independent online media outlets, was purchased in 2011 by Közép-európai Média Zrt. whose chairman, József Spéder, is also the chairman of the Land and Credit Bank Zrt. (FHB).   Spéder is generally credited with being the architect and main beneficiary of the highly controversial 2013 nationalization and 2014 re-privatization of the Takarékbank, about which neither index.hu, nor other Spéder-controlled online publications (napi.hu, portfolio.hu, vg.hu) had anything remotely critical to report.-ed.).

The interview/article opens with the following:

Foreign opinion of Hungary has visible deteriorated over the past half year.  Rhetoric used in the American-Hungarian conflict on the other hand is dangerously starting to remind one of Putin’s rhetoric says Zsolt Németh, the Fidesz chairman of the parliamentary foreign affairs committee, evaluating Hungary’s foreign policy situation.

Since coming to power in 2010 the third Orbán government has been the subject of censure.  Disputes of a legal nature were characteristic of the earlier period.  Questions of foreign policy and the questioning of Hungary’s foreign policy with regard to the Eastern opening is a new development (according to Németh).

How has the international community’s perception of Hungary changed in the last six months?

There’s no doubt that Hungary’s reputation has worsened. This fact is undeniable. The problem is increasingly worse when looking at those countries who stood beside us in the previous four years.  Here I am thinking of our Central-Eastern European allies.

How does the current perception – and current European Union perception – of Hungary compare to what it was at this point during the previous Orbán government?

Németh responds that it’s about at half of where it was at the previous point. However, he believes there is always a large cost when a government tries to carry out larger changes.

“The fundamental issue here is whether [the changes] are actually worth the cost. This is something the Hungarian government should weigh,” reasons Németh.

Regarding the restructuring of the Ministry of Foreign Affairs and Trade

“The ambassadors are working, attempting, and carrying out their duties. Basically, I have a good opinion of Hungary’s ambassadors. The current changes at the Ministry of Foreign Affairs and Trade have not had a negative impact on the quality of our diplomatic staff. A large number of missions are being led by people who had earlier served in leadership capacities or were ambassadors,” said Németh.

Regardless, he believes that “the time of consolidation has arrived” and it is the responsibility of the ministry to formulate its doctrine and craft its strategy.

On the US travel ban

Németh says controversy surrounding the U.S.-Hungary travel ban came about in a “rather unusual way”.

“It’s unfortunate if someone is publicly accused of corruption in a way that does not permit the accused the opportunity to defend themselves,” he says, referring to the chief of Hungary’s National Tax and Customs Administration Ildikó Vida.

Németh thinks that among allied countries it is expected that both sides would do everything to present each other with grounded facts.

“I’m not convinced the United States did everything to investigate its charges against the specific individuals. But I obviously see there is a context to this issue: Ukraine, Putin, South Stream gas pipeline, Paks. However, these don’t excuse allies from respecting the rules of procedure.”

Németh would be happy to see the US travel ban play out in the court and he thinks “Hungary’s response to claims made by the American Chargé d’affaires made that clear.” He hopes “Washington will learn from this in the future and this issue can be settled in a normal forum.”

“What makes the travel ban issue unique is that abnormal reactions were used to respond to abnormal actions, and that makes it difficult to formulate judgement in the matter.”

He says he wouldn’t have publicly called upon Vida to file defamation charges against acting US embassy spokesman André Goodfriend, as Prime Minister Viktor Orbán did, but rather would have asked her to do so in a private discussion.  (Bullshit!  Nobody in their right mind would respond by bringing criminal charges against America’s top diplomat in Hungary. –ed.)

Németh seems to have taken a page from Johns Hopkins School of Advanced International Studies professor Charles Gati who likened US-Hungary relations to a marriage in crisis. “This is the deepest crisis we have experienced since our marriage began.  It’s a situation in which both parties sometimes lose total control of reason and self-control. For example, this is what happened with Senator McCain. But I think it would be wrong to assign all blame to America when it takes two to tango.” Németh thinks there has been a cooling off in US-Hungary relations over national security issues, notably NATO, Russia and the South Stream gas pipeline.

He thinks it is worth pondering what the underlying form of the US’s anti-corruption campaign will take; will it be an issue of cooperation between national governments or an issue that one government will use to exert political influence over another.

“It’s a fact that here in Central-Eastern Europe we haven’t found the miracle cure for the fight against corruption, and in such cases we could even benefit from support in the fight. But if the issue of corruption is going to be brought up simply as a political tool, then this isn’t going to work.”

On being a member of the Euro-Atlantic community

In response to whether he doesn’t think it worrying that, while we are a member of the Euro-Atlantic community and alliance system, before long the enemies of the alliance will be Hungary’s friends, and the United States its enemy, Németh said “the rhetoric of Putin has appeared to an extraordinary degree”.

“Assumptions, accusations are mutually formed.  For example, on America’s part that Hungary is a special partner of Russia.  (Putin’s words, not McCain’s.-ed.).  At the same time rhetoric about America (in Hungary) is starting to remind one of Putin’s rhetoric.  I am thinking about those statements according to which America’s main goal is to divide Europe from Russia.”

Németh thinks the situation would be resolved if the West would offer a reasonable policy towards Russia.  “There are those who believe it is possible to defeat Russia, and all that is needed are weapons, determination and money.  But our Western allies need to realize that it is not possible to defeat Russia militarily or economically.  The West needs to come up with a worthwhile and uniform proposal with regard to Russia.  It is not clear now whether there is a difference of opinion or merely a division of labor under way in what is taking place between the United States and Europe.”

Németh believes that the West is stigmatizing Hungary for being “Putin’s European repository”.

Asked for his thoughts on Orbán’s statements that NGOs who receive foreign funding should be treated as they are in Russia’s current model, Nemeth says: “Be it in the civil sector, or with the travel ban issue, our underlying interest is not to build newer walls between Hungary and the West.  We shouldn’t be banning people, we should be inviting and playing host to others! Because it is Putin’s model that makes charges and bans in response.”